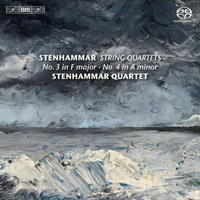 
If there is one Swedish composer in the early 20th century who in some way can compare with Sibelius and Nielsen, it is Wilhelm Stenhammar – incidentally a personal friend of both these towering figures in Nordic music.

And in Stenhammar’s production – which includes songs, piano music and large-scale orchestral works – his string quartets form a special chapter. The seven quartets (of which one, in F minor, was withdrawn by the composer soon after its first performance) were written over the space of 22 years, and mirror Stenhammar’s development, from full-blown Romanticism to a more sparse and formally concentrated idiom.

As a pianist, Stenhammar worked closely for many years with the Aulin Quartet, the finest Swedish string quartet of its time. (It was the Aulin Quartet that gave the first performances of all Stenhammar’s quartets up to and including No.4 in A minor, Op.25.) His familiarity with the medium is evident in these works which have been described as ‘the most important written between those of Brahms and Bartók’, but which still remain less well-known internationally than they deserve.

In a bid to change this, the Stenhammar Quartet here present the first disc in a trilogy which will include the six quartets published during the composer’s lifetime, as well as the F minor quartet – for the first time on disc – and other music for string quartet. Making its first appearance on BIS, the Stenhammar Quartet was formed in 2002 and has made a name for itself in Sweden and internationally as interpreters of Stenhammar’s music, as well as of core repertoire and contemporary works.

If you don’t know the Stenhammar string quartets (six published quartets plus one unpublished) you owe it to yourself to hear them. Seldom recorded, they are nevertheless wonderfully constructed and warmly romantic, tonal utterances that deserve a place in the repertoire. I first became aware of them in the pioneering RBCD recordings on the Music Seveciae label made in the early 1980’s by a trio of Danish quartets (Fresk, Copenhagen and Gotland). Fast forward to recent years, we now have two quartets presumably in the process of recording these works on SACD – the Oslo Quartet for CPO and now the Stenhammar Quartet for BIS. The Oslo quartet has released a two disc SACD set with quartets 3-6. My review of that set can be found here: Stenhammar: String Quartets 3-6 - Oslo String Quartet The performances from the Oslo’s was top notch but I was less enamored with the recorded sound which is overly reverberant from a billowy church acoustic. It remains to be seen if the Oslo Quartet will complete the cycle with quartets 1 and 2.

On to this BIS release of quartets 3 and 4. One would expect that a quartet named Stenhammar would provide fully idiomatic performances of these works an indeed they do! Every phrase is lovingly articulated with excellent ensemble and dynamics. One can tell that the performers love this music. I would say that the performances here are even more excellent than those by the Oslo quartet and now take first place in the admittedly small Stenhammar quartet sweepstakes. Another advantage this SACD has over the CPO set is sound quality. This also is a church recording (Petrus Kyrkan, Stocksund) but BIS sound engineer Thore Brinkmann has managed a much more judicious balance between the direct and reverberant sound. Everything is nicely balanced and all four string players are well represented in the mix. Violin timbres are natural sounding without any digititus. The recording was mastered in 24 bit, 96 kHz pcm.

In addition to the two quartets, this disc includes incidental music for string quartet for a theater drama entitled Lodolezzi Sings. The two movements add 7:27 minutes of fine, if rather inconsequential, music to an excellent recording. BIS have already released an SACD of quartets 5 and 6 which includes the aforementioned unpublished F minor quartet from 1897 (which came between quartets 3 and 4). I’m looking forward to that release with great anticipation as well has hoping for the Stenhammar Quartet to complete the cycle with a release of quartets 1 and 2. Highly recommended! 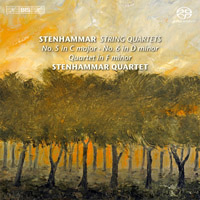 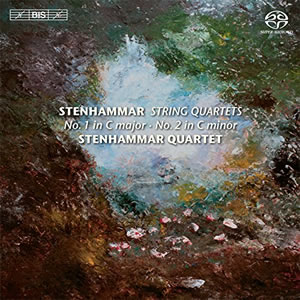