FYI - Berlin Classics × TOWER RECORDS is having a sale right now, which include most of the Sanderling sets, only exception is the Brahmas set. I ordered the Brahms, Mahler, ...

Received the box today. After listening to the most interesting disk, symphony 8, I must say that I'm pleasantly surprised with this very recording. Although it's obvious ... 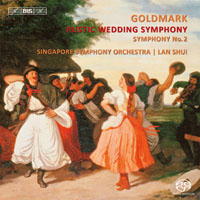 
Mainly known today for his violin concerto, during his lifetime the Hungarian composer Karl Goldmark was praised for the quality of his instrumentation, his skilful use of folk music and his own Jewish heritage, and his evident gift for melody.

The author of several operas, among them The Queen of Sheba, Goldmark wrote music in most genres, and although largely self-taught he was sought out as a teacher of composition by Sibelius, among others. Composed in 1875, his ‘Rustic Wedding’ Symphony was his most popular orchestral work. At the first performance the audience hailed it as a triumph, and Goldmark’s friend Brahms said about it: ‘clear-cut and faultless, it sprang into being a finished thing, like Minerva from the head of Jupiter.’

The five-movement symphony has sometimes been described as a suite of tone poems, including a wedding march with variations depicting the wedding guests, a nuptial song and a bucolic wedding dance. Even though the work is now a rarity in concert, conductors such as Sir Thomas Beecham and Leonard Bernstein demonstrated their belief in it by performing it on many occasions.

Composed some ten years later, Goldmark’s E flat major symphony, Op.35, is far less well-known. Although its form is more traditional than that of its predecessor, it is similar in mood – bucolic and high-spirited – and provides rich opportunities to sample Goldmark’s skill as an orchestrator and musical colourist. Performing these unjustly neglected works is the Singapore Symphony Orchestra – a band which under its principal conductor Lan Shui has impressed reviewers in repertoire as diverse as Debussy’s La Mer (‘an unequivocally world-class performance’, BBC Music Magazine), Zhou Long (‘utterly compulsive… orchestral playing of the highest calibre’, International Record Review) and Rachmaninov’s Second Symphony (‘a moving, completely satisfying performance’, allmusic.com).

Very little, if any, of the music of Karl Goldmark (1830 -1915) is heard in the concert hall today, and like so many lesser composers of the 19th century it is solely thanks to recordings that his well-crafted and melodious compositions can be enjoyed.

Though a fairly prolific composer of music in most genres, it is by three works, coincidentally bearing consecutive Opus numbers, that he is mostly known. These are - the Rustic Wedding Symphony Op.26, the opera 'The Queen of Sheba' Op 27 and the Violin Concerto Op.28.

The first of these is the main work on this excellently played and recorded BIS SACD. In spite of the title it is not really a symphony in the formal sense of the word, but is more akin to a five-movement suite; each movement of which has a title pertinent to the work's subject - a rustic wedding. It opens with a 'Wedding March' which consists of an engaging set of 13 variations on an amiable theme - first stated on the lower strings and beautifully articulated on this recording by the players of the Singapore Symphony Orchestra. The four movements that follow are 'Bridal Song', 'Serenade', 'In the Garden' and finally 'Dance' that recalls music from the earlier movements. It is easy to see why this piece was so admired by Brahms - Goldmark's younger contemporary - for both the thematic confidence of the writing and clarity of its instrumentation.

Conductors, as different in temperament as Beecham and Bernstein, considered this piece worthy of their attention and both made memorable recordings of it. Lan Shui's affectionate reading on this SACD is hugely enjoyable and will surely make many new friends for this charming neglected work. His awareness of the nostalgic sadness that pervades much of Goldmark's music is evinced by his ravishing performance of the work's 4th movement while the work's livelier sections are delivered with winning élan.

Goldmark's 2nd Symphony Op35 composed some twelve years after the 'Rustic Wedding Symphony' is, in its conventional four-movement layout, exactly what one might expect of a symphony dating from this period. The opening movement has a fine muscular drive that clearly indicates the influence of Brahms, but to this listener, also something of the early symphonies of Dvorak in its freshness and immediate appeal. The third movement is pure Mendelssohn, though the movement's trio section surprises with an unexpected and confidently played songful trumpet solo.
The sound quality on this BIS recording(Op.26 24-bit 44.1kHz, Op.35 24-bit 96kHz) is, bar a touch of shrillness on the upper strings, well up to the usual house standard of excellence. This SACD is a most welcome addition to the catalogue and Lan Shui's performances of Goldmark's unpretentious and heart-warming music can be confidently recommended.

There is not much to note about the performances here other than to say they are excellent in every way. Goldmark’s “Rustic Wedding Symphony” is really a five movement suite of top notch late romantic-era music that is, above all else, light and appealing. Lan Shui and the Singapore Symphony are excellent proponents of the piece and, in my experience with this music on RBCD, there are none better.

The Second Symphony is from 1887 and is in four conventional movements. The excellent booklet notes indicate that Goldmark actually composed and early symphony around 1858-1860 (not to be confused with the Rustic Wedding Symphony from 1875) of which only the scherzo has been published. Perhaps an adventurous label (like BIS!) could scrounge around for the remaining movements and give the world another premier. In any case, the Second Symphony is less memorable than the Rustic Wedding but no less than a good example of a second tier symphony for its time.

Sonically, this is yet another wonderful BIS orchestral recording. The two works were recorded two years apart – the Rustic in August, 2009 and the No.2 in August, 2011 and the pcm master resolutions were apparently different (according to the notes on this site). The booklet states a resolution of 44.1kHz/24 bit but comments from Robert von Bahr on this site say that the later symphony was actually captured at 96 kHz/24 bit resolution. Since the venue is the same this could be an excellent chance to compare these two resolutions if one assumes (and this could be a big assumption) that all else is equal in terms of microphones, their placement and the rest of the recording chain. The caveat that different sound engineers were used for the two works probably obviates the “all else being equal” assumption. In any case, I was hard pressed to note any significant differences in the sound. If anything, it seems that the Sym No.2 was recorded just a touch farther back (or else more hall sound was mixed into the stereo tracks) giving it a little more breathing room in the soundstage. Of the two recordings, I slightly prefer the immediacy of the Rustic Wedding over the Sym No.2 – but this in no way detracts from the overall excellence of both recordings which are natural and impactful.

A full disc (76 minutes) of well-recorded, late romantic-era music – what’s not to like? Highly recommended! 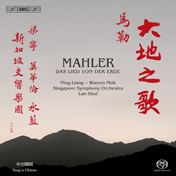 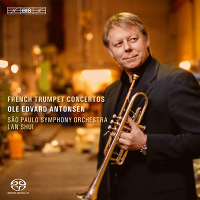