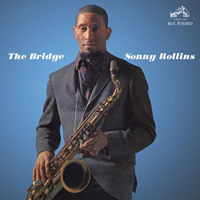 "The Bridge" is a landmark session in Sonny Rollins’ catalog that was recorded after a long period of self-imposed seclusion, reflection and practice.

BACKGROUND
By February 1962, when Rollins returned to active recording and performing, John Coltrane, Eric Dolphy and Ornette Coleman had been unsettling the scene with sheets of sound, microtonality, and free-jazz ensemble playing. Sonny’s approach seems less forward-looking by comparison, but the music on “The Bridge” reflects a range of styles that interested him at the time, from ballads to modernistic excursions.

MUSIC
The selection of four standards and two Rollins original compositions frames the set well within the musical mainstream of the period—almost to the point of conservatism. Sonny was more of a stylist than a conceptualist: he wasn't trying to revolutionize the music as a whole or the sound of his instrument. That distinctive sound had not undergone a major transformation during his period of solitude.

Some writers described Rollins' tone as "cello-like", an implicit comparison to Coleman Hawkins, who acknowledged the influence of Pablo Casals' cello on his gruff tenor tone. The jazz critic of the New York Times once derided Sonny's "bleak, ugly tone." Only a person who is indifferent to the years of practice required to forge a unique sound on a musical instrument could deliver such an dismissive assessment. Sonny didn't sound like any other tenor player of his own generation or the preceding one. Fellow musicians admired his rhythmic phrasing and sense of structure.

On the ballad Where Are You? and Billie Holliday's God Bless The Child, Sonny fluently expresses the inner voice that he'd rediscovered during his time away from commercial recording and performance. Jim Hall's comping and counterpoint on Without A Song make a flexible foil for Sonny's inventive melody lines. The title tune The Bridge, according to session producer Bob Avakian, was virtually improvised in the studio, demonstrating that Rollins and Co. were more than equal to the challenge of spontaneous composition.

SOUND
"The Bridge" was remastered from the original stereo master tape by Bernie Grundman, one of a group of four SACDs released by ORG Music in 2013. “The Bridge” was previously reissued in 2003 in RCA’s Bluebird First Edition series, remixed and remastered by Mark Wilder. Comparing the two reissues reveals the virtues and drawbacks of each approach.

The ORG Music SACD draws the listener into the studio space of RCA’s Studio B. While the sound never quite attains the high quality of Rudy Van Gelder’s best recordings, it is striking to hear just how much subtlety could be captured within the limitations of analogue tape.

On the SACD, in the opening of the ballad “Where Are You?” Ben Riley’s brushwork is very recessed – he’s distinctly located behind bassist Bob Cranshaw, dead center in the mix – yet the percussive texture never completely disappears in the background.

On Wilder’s remixed CD, the drums are pushed forward and spread from center partly into the right channel. Not a wrong esthetic decision, but not the same as the original mix.

A high resolution transfer is going to reveal artifacts of age and wear in the source tape. Some of the tracks on “The Bridge” SACD are clean and undistorted, from the deep lows in Bob Cranshaw’s upright bass to the sheen of the cymbals, particularly in the ballads. Other tracks display a slight graininess in the saxophone and what could be signal oversaturation (over and above intentional amp distortion), on Jim Hall’s electric guitar.

Those details are less apparent in Wilder’s CD issue. Remixing (and perhaps EQ and digital reverb) result in a more consistent, but less authentic-sounding product. In the drum break at 4:44 on the title track, Ben Riley’s hard snare snaps and tom-tom rolls sound dry, distinct and vivid on the SACD, smoothed-out and somewhat veiled in reverb on the CD.

"The Bridge" affirms Sonny Rollins' conviction that his playing had gone to a new level.

Sonny Rollins celebrates 85 years of life and music today. In this video clip from the Tavis Smiley show, he discusses the sabbatical from performing that led to "The Bridge".