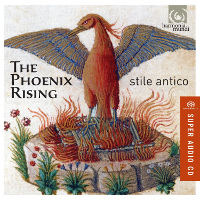 
Among the many endeavors funded by the Carnegie UK Trust (a group that is celebrating its centenary), their publication of an anthology entitled Tudor Church Music in the 1920s transformed the musical life of an entire nation. For the first time, a significant body of the greatest Tudor compositions became accessible to scholars, performers and listeners alike. On The Phoenix Rising, the acclaimed choral ensemble Stile Antico presents a varied selection of the finest pieces from the collection in a program centered around William Byrd's masterful five-part mass.

The eighth album from British choral group Stile Antico is here. Every one so far has been highly praised. Worry not, there are no signs of flagging, either of performance or programme. Specialists in music from the English High Renaissance, the group are here celebrating the centenary of an organisational gesture which unexpectedly led to an unearthing of Tudor sacred polyphony and its dissemination to choral groups all over the world.

The organisation is the Carnegie UK Trust and its gesture was the funding of a ten-volume collected edition of works, 'Tudor Church Music' (TCM) by the great Tudor composers. Previously, choirs had to work with fragile original MSS, sometimes fragmentary, which often first had to be tracked down in cathedral or in mansion house libraries. The autograph pages, often in large part-books, did not then benefit from modern musical notation, so they had to be translated into current standards to make them available to all music lovers. This required patience, diligence and skill on the part of scholars, who were eventually repaid for their efforts by the appearance of TCM, which transformed the musical life of a whole nation.

Stile Antico, conductorless, not only sing but each member is involved in researching the staves and texts which they will be using in concert, and together they agree the tempi, rhythms and dynamics of each piece (such instructions were very rarely written down with the notes in Tudor times). They also concoct their often ingenious programmes for concerts and recordings. In other words, they are all deeply involved in the whole process of music-making, not just following a leader, and this shows in their fresh, almost spontaneous approach.

The track list for this disc reads like a roll-call of great Tudor composers, many of them almost household names now, thanks to TCM and all its users. Each has their particular style, each adapting their output to the rapid swings between Catholicism and various forms of Protestantism in a period of religious and political upheaval which claimed many lives, including those of musicians. Many pieces are glorious favourites now, like Byrd's luminously burdened 'Ave verum corpus' or the joyful clamouring of Orlando Gibbons' 'O clap your hands together'. Byrd's Mass for 5 voices is the largest work on offer, probably to be sung in carefully hidden make-do chapels in recusant Catholic manor houses. It is, however, split up by other works, and one might feel that its power and importance is somewhat lessened. The reason cannot have been to construct the feeling of a liturgical event (which? - there were several liturgies in Tudor times), because the interpolations come from widely different time periods and regimes.

As usual, Stile Antico sing with their customary natural, unforced vocal timbres, sopranos particularly pure-toned, more like young boys voices. This is a plus point, since women were forbidden in church choirs, replaced by male falsetto or boys (or castrati in Italy). The group extract everything they can from the emotions expressed by their composers, pacing the music, responding to rhythmic changes and revelling in the many tonal clashes and outright dissonances supplied by these masters of late Tudor polyphony. Above all, there is a great sense of spirituality in Stile Antico's work.

St Jude in the Field, London, provides their airy recording venue, Harmonia Mundi's engineering being entirely natural and unobtrusive. The packaging is a Digipak with a multi-language booklet, unfortunately pretty small in typography but at least with all the texts in Latin, German, French and English.

Surely a self-recommending issue for fans of Stile Antico, but also a fine introduction for beginners to high Tudor sacred music from its greatest masters.