For me, Paavo Järvi and The Deutsche Kammerphilharmonie Bremen was at the time one of the best combinations in Germany, both in terms of playing and recording. The sound of ... 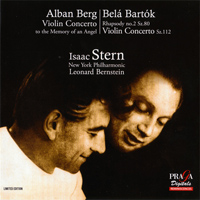 
A generous collection of concertos which had a real impact in the pre-war years. Berg wrote his concerto in memory of Manon Gropius who died aged 19, the daughter of his muse Alma, Mahler s widow. He himself died shortly afterwards of septicemia. It was his last completed work and became his own farewell piece. Bartók had a premonition of the horrors of the Second WorldWar. Stern and Bernstein convey the beauty and pathos of this masterpiece, which ultimately reflects faith in the brotherhood of Man. An immaculate new mastering in SACD.

"1 of 1 recommend this"...
After van Keulen's middling recording on Chandos - Berg: Orchestral Works - Venzago - I have tried to find a satisfying SACD of Berg's Violin Concerto. Perhaps this will fulfill my expectations (though there isn't multi-channel layer).

it isn't multi-channel, because it's a recording from 1962!! And the source of this Praga disc is dubious. If you're looking for a definitive recording of the Berg violin concerto, you should purchase Isabelle Faust + Abbado on Harmonia Mundi: it's on redbook, but apart from the nec plus ultra performance, it's also stupendously recorded, by far superior than the one you settled for.

it would seem that this is the same recording as the one available in the Sony Stern series (a disc from 1995), which sounds great (a SONY superbitmapping). But the booklet in this Praga SACD says the recording of the Berg was on February 6th, 1959, whereas the SONY disc says it was December 6th, 1959. Clearly, either one must have it wrong--can't imagine Stern/Bernstein recorded it twice in the same year!
I don't think there is much difference between the CD and the SACD, though the latter can a tiny bit boomy in places (can't recall that for the SONY disc, but I might be wrong--it seems the Praga engineers flat-transferred it from the original source tapes, as it is suggested in the booklet notes). The recording is actually quite good for its age, but I much prefer the Faust/Abbado recording of a few years back, which is the current gold standard for the Berg concerto, both in terms of performance and sound engineering (though it's not a SACD, but you won't notice).

Btw: I bought this disc with an idiotic discount form jpc, together with 11 other Praga discs, varying from 0.99 eurocents to € 2.99. You can't pass that up!