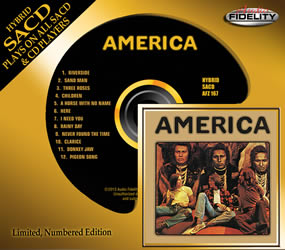 
Released in 1971, America is the self-titled debut album from one of the most original and influential pop groups of the '70s. The album went to # 1 on the Billboard album chart and stayed there for 5 weeks. It produced two hit singles, "A Horse With No Name" spent three weeks at # 1 on the Billboard singles chart in 1972 and "I Need You" hit # 9. America highlights the exquisite harmonies and subtle acoustic shadings that would become an America trademark. Dewey Bunnell, Gary Beckley and Dan Peek - each an accomplished vocalist and guitar player - first met in England in 1967 while stationed with their parents at a U.S. Air Force base. They soon began seriously writing and performing together, eventually taking the name of a homeland they hardly knew. America quickly gained a reputation for incisive, evocative songwriting and appealing performances built around their distinctive three-part harmonies.

The album is produced by Ian Samwell with Jeff Dexter and America, (and engineered by Ken Scott). 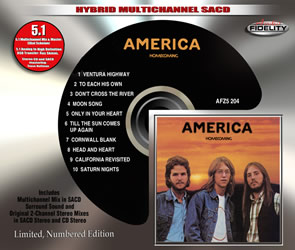 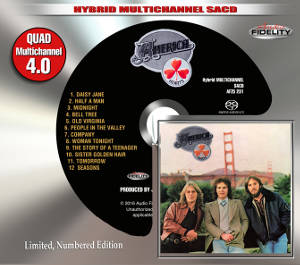