And "Rainer" it should say: Manfred's brother, concertmaster of the Vienna Phil, and sometime conductor. Or do I misunderstand your comment?

Which Honeck? Slip of the pen, I suppose. The sleeve says Rainer. 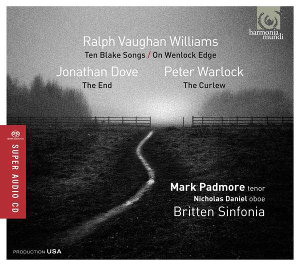 
Tenor Mark Padmore is featured in a program featuring three quintessential British song-cycles. He is joined by pianist Huw Watkins, oboist Nicolas Daniel and members of the Britten Sinfonia in Ralph Vaughan Williams's On Wenlock Edge and Ten Blake Songs and one of Peter Warlock's best-known works, The Curlew. Also included is The End by Jonathan Dove (a co-commission by Britten Sinfonia and Wigmore Hall with support from the Tenner for a Tenor campaign). The work receives its world première recording here.

This carefully constructed programme of English vocal chamber music is enthralling. The works of Ralph Vaughan Williams, Peter Warlock and Jonathan Dove are ideal vessels for Mark Padmore's phenomenal skills in seeming to inhabit the poetic characters and atmospheres of their song groups. He is joined by members of the Britten Sinfonia, who provide chamber groups for VW's 'On Wenlock Edge' (string quartet, with pianist Hugh Watkins), Warlock's 'The Curlew' (string quartet, cor anglais and flute) and the World Première of Jonathan Dove's 'The End' (string quartet and cor anglais). Renowned oboist Nicolas Daniel joins Padmore in VW's 'Ten Blake Songs', making a contribution which is engrossing.

In 'Wenlock Edge', A.E. Houseman's poetry captures the rural essence of Shropshire's fertile landscape and history. Padmore sings as though he has read and absorbed the poetry so intensely that he can replay every nuance of expression and emotion for us, with an amazing range of tone colours and timbres. The accompanying instrumentalists help in the portrayal of atmosphere and sense of place, which combine with their tenor's voice to produce a haunting reading. So clear in expression is Padmore that you hardly need to follow with the texts.

The same intensity of understanding and appreciation deeply imbues Padmore's 'Ten Blake Songs', with oboe playing of exquisite beauty to underline and illuminate Blake's visionary poems. These make an even wider exploration of the human condition than 'On Wenlock Edge', from the gentle joy of an innocent infant to Padmore's spine-tingly icy and menacing voice for 'Cruelty has a human heart'.

Blake's poetic allegories of Christianity, for example 'The Lamb' ("Little Lamb, who made thee?" - often taught in Infant Schools) are done with stoic simplicity. Penultimately, 'The Divine Image' is given a searing performance, without the support of an oboe here, a radiantly hymn-like solo until the final lines where Blake reminds us of the oneness of the human species ("And all must love the human form, in heathen, Turk or Jew, When Mercy, Love and Pity dwell, there God is dwelling too") where Padmore's voice is soft and compelling.

Peter Warlock's choice of the Irish William Butler Yates' poems for song-setting were at first scorned by the irascible poet, but eventually he relented and allowed Warlock to compose. Warlock arranged the poems in what seems to be a logical order, a sort of pseudo-cycle entitled 'The Curlew' emerging, and he was proud of this. His influences were Delius, Schoenberg, Bartók and even Purcell, but his music is basically romantic at heart. The Delius and Schoenberg characteristics shine out in the string quartet, flute and cor anglais, where the sometimes wild landscapes in Western Ireland are evoked. The long-beaked Curlew of the boggy moors with its mournful cry was often used symbolically by the poet. TWarlock's use of the chamber orchestra makes its relationship with the singer more important than the other works in the programme. There is even an interlude for instruments only. Padmore's singing floats and soars above this shimmering orchestral tapestry, with breathtaking integration of voice and instrumental atmospherics.

Jonathan Dove (b.1959, two years after VW wrote his Blake Songs) is not yet well known, but on the evidence of his piece 'The End' (2012), I look forward to hearing more. He explains in a note in the insert what his inspiration was - hearing the poetry of Mark Strand. The setting was co-commissioned by Britten Sinfonia and Wigmore Hall, with support from "Tenner for a Tenor" Campaign. It begins "Not every man knows what he would sing at the end", and views approaching death as a ship sailing away, carrying with it many beautiful memories of life and love. Strings provide a gently rocking wave motif throughout most of the journey, while the tenor voice reminisces and even looks forward, while the flute provides bird images and the sober cor anglais, with darker tone, describes the deep emotions evoked. This is a moving and thoughtful piece of great beauty. In style and sentiment it sits very comfortably with the other vocal chamber works on this disc. It looks as though the vocal chamber music genre may have another contributor helping it to keep fresh and alive.

Sonically, an airy studio houses the players in a rough circle, with Padmore just inside front centre - as depicted on a session photo. The intimacy of the playing matches the music, and every timbre is captured. The only issue I have is a persistent low-level hum in the background, perhaps from a heating unit or air conditioning. I was playing at a reasonably realistic volume level, and could hear the hum at run-in and run-out, sometimes even underpinning quiet passages, which I found disturbed my concentration.

The English texts and commentary in the insert book have French translations, while the musician's qualifications are in English, French and German. There are, of course, pictures of Curlews.

This is a marvellously planned and executed programme, performed with exquisite musicianship. It gives deep satisfaction at all levels; being so remarkable that I easily forgave the errant hum. Highly recommended.