Athenaeus, please have a look at my comments on the blu-ray release of these recordings. 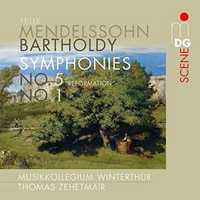 
Symphonic Coup
A new coup by the Musikkollegium Winterthur! Its complete recording of Felix Mendelssohn Bartholdy’s symphonies – this time Symphonies Nos. 1 and 5 – continues with Thomas Zehetmair at the conductor’s desk of the oldest Swiss orchestra. And once again a gripping interpretation is the result; the Winterthur musicians demonstrate their special philharmonic class, producing a nimble and subtle sound.

Child Star
Felix Mendelssohn Bartholdy was just fifteen years old when he completed his first symphony. Since the child prodigy had already delivered twelve symphonies for string orchestra, it was actually only his first symphony in which a full-fledged wind instrumentation perfectly complemented the strings. Even among the composer’s contemporaries it met with almost unanimous enthusiasm, and the young star was mentioned in the same breath with Haydn, Mozart, and Beethoven!

Glorious Past
A mere five years later Mendelssohn composed his “Reformation Symphony,” which today is counted as his fifth symphony. Just before he had rediscovered Bach’s St. Matthew Passion, and the influences are quite audible: baroque compositional technique and magisterial counterpoint mark this work, which therefore seemed to some to be “too erudite.” But this is hardly the case: just listen to the mirthful lightness of the second movement, which conveys a special effect when performed by the trim Winterthur ensemble.

Promising Future
Mendelssohn’s employment of the “Dresden Amen” (which influenced Richard Wagner more than he would have liked to admit – it is later found in his Parsifal) and Luther’s chorale “Ein feste Burg ist unser Gott” in the last movement also point far ahead into the musical future. Under Thomas Zehetmair’s leadership the Musikkollegium Winterthur rids Mendelssohn’s symphonies of their late-romantic ballast and provides for pure audio pleasure with its transparent and fresh sound. Moreover, threedimensional 2+2+2 sound and the finest SACD technique are guaranteed to inspire repeated and rewarding listening! 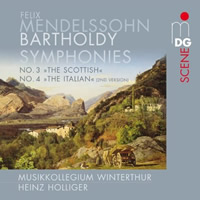 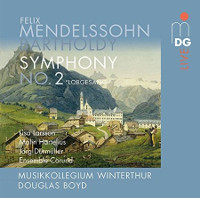 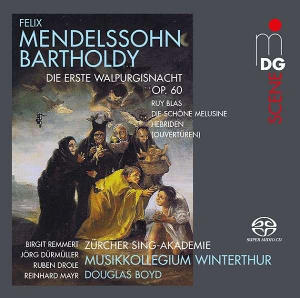