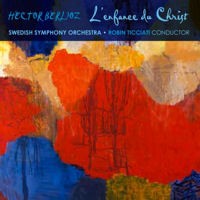 
Robin Ticciati and the SRSO are joined by a sterling cast of soloists including: Stephan Loges, winner of the Wigmore Hall International Song Competition, Veronique Gens, whose recording of Berlioz' Les nuits d'été was named Gramophone ‘Editor's Choice', Yann Beuron, who was unanimously awarded first prize in 1996 from the Conservatoire National Supérieur de Musique de Paris, and Alistair Miles, who has been called ‘the finest British bass of his generation' (The Guardian).

Berlioz's mighty oratorio was an immediate success and was praised by all but two critics in the Paris newspapers; over 150 years later it is still as popular.

Named one of the top ten young ‘conductors on the verge of greatness' by Gramophone, Robin delivers fresh insights and vivid colours into this luminous work. Since his recording debut Robin's profile has continued to build; in 2011 Gramophone voted him one of 'Tomorrow's Icons' and he was announced as the next music director of Glyndebourne, taking over from Vladimir Jurowski in 2014.

Robin Ticciati's highly regarded and refreshing progress through Berlioz with the Scottish Chamber Orchestra (Berlioz: Symphonie Fantastique - Ticciati, Berlioz: Les nuits d'été & La Mort de Cléopâtre - Ticciati) now reaches the triptych of L'Enfance du Christ. He conducted L'Enfance with the SCO in February 2010, but this recording took place on 11th & 14th December 2012, with the Swedish Radio Symphony Orchestra and Chorus at the Berwaldhallen, Stockholm. The principal soloists were Véronique Gens (soprano, Mary), Alastair Miles (bass, Herod & Father of the Family), Yann Beuron (tenor, Narrator), and Stephan Loges (baritone, Joseph). Of the soloists, only Yann Beuron performed at the Edinburgh concert. There are two lesser roles, their names impolitely omitted by the album's producers. Members of the Swedish Radio Chorus supplied the voices of Centurion (Niklas Engquist) and Polydorus (Joachim Schuster) in Part 1, and they did a fine job.

I listened to Ticciati's version while referencing two of the finest readings, those of Colin Davis's first recording and Matthew Best's Corydon Singers and Orchestra. The Swedish Radio Chorus and Orchestra respond with great concentration in realising the conductor's seemingly innate gift for understanding the Berlioz idiom. The work is not spectacular or histrionic, as are most of Berlioz's major works. The music is mostly quite slow. The orchestrations follow what the composer called his "antique" style, with chamber orchestra-like minimalism, mostly strings and double wood wind, with no heavy brass and rare use of the horns. It is also mostly quiet, with very few passages reaching double forte, but several times Berlioz requests playing as softly as ppp, executed here perfectly by all musicians concerned.

The word which came frequently to my mind was "subtle"; Ticciati drawing much intimate and delicately shaded playing and singing from the Swedish forces and the soloists. Also notable is the very French, or rather Berliozian, sound of orchestra and choir, the particular balance of colour drawn from the spare orchestral palette. This applies particularly to the woodwind (which also includes the cor anglais), being voiced like the reeds of a French organ. This approach is enchantingly different to the general metropolitan over-glaze produced by many of the larger, high-profile orchestras and choirs. French pronunciation is generally very good, and well-articulated into the bargain.

All the soloists show evidence of understanding and vocally imaging the emotions of Berlioz's deeply romantic characters in his own libretto, where his imagination goes much further than the limited biblical accounts of the Nativity. His story revolves around the apocryphal flight of the threatened Holy Family to the Roman-governed Egyptian town of Sais. This allows him to picture the sheltering family in a Roman villa, the travellers being entertained by a trio of two flutes and a harp, played with the utmost grace and delicacy by soloists from the orchestra (and one of Berlioz's very few writings of pure chamber music).

Judging from instructions and remarks in Berlioz's score, he envisaged that his quasi-operatic drama should be presented with certain spatial changes of position, particularly of the singers. For example, during the whole of Part 1, he wanted the male choristers to stand alone on one side of the stage in sight of the public, while the female chorus members stood behind the chorus leader at the harmonium or organ. At the beginning of Part 2, they are to take their places on the stage opposite the men, with the exception of four of each of the two voices, which are to remain behind the stage to the end, to sing the Alleluja and Amen. He recommends that this female semi-chorus should be in a room behind the stage (or behind curtains), and during the diminuendo, the choristers should turn their backs to the stage in the last five bars, as a form of damping.

Despite the possibility of using multichannel recording to implement or adapt these instructions, the Linn engineers have opted for a standard concert set up, with female choristers to the left and males to the right. The hexagonal underground auditorium of Berwaldhallen (excavated in solid rock and lined with wooden panels with gaps to regulate reverberation) came near the bottom of a ranking study of the acoustics of a number of Swedish concert halls. Its reverberation time is shorter for low frequencies than for middle frequencies, which is some way off the recommended reverberation time curve. Linn's relatively intimate presentation allows little of the hall ambience to register in this recording, and indeed there is very little focussed depth perception for most of the time. However, the above mentioned prayerful choruses at the end of Parts 2 and 3 are given a great deal of reverberation seemingly from behind the orchestra, and this slowly diminishes to pppp, singers retreating at the same time. The Swedish ladies exquisitely control this diminuendo, and sound like the Angels which Berlioz pictured. However, I personally prefer the lovely bloom and ambience afforded by Hyperion in Best's L'Enfance du Christ, where both orchestra and singers sound more open. Others will no doubt enjoy the intimacy of Linn's presentation.

Linn's production is attractive. The two discs rest in two gates of a three-gate Digipak, the end gate being a slip case for the substantial (59 page) booklet. Per Kirkeby's large abstract painting of The Flight Into Egypt (1996) is aptly used in photographic extracts on the front and rear covers, its vivid colours being most attractive. Berlioz scholar Hugh Macdonald provides a fascinating essay on the origins of the work, and Ben Quosh presents another essay: an absorbing theological perspective.

Despite some disappointment about the missed opportunity to attempt Berlioz's spatial instructions, and the relative closeness of the musical forces, I greatly admired Ticciati and his Swedish Radio forces in their subtly played and sung L'Enfance de Christ, which sounds so French and oozes with idiomatic Berlioz. I shall not, however, not be retiring my Davis and Best recordings. 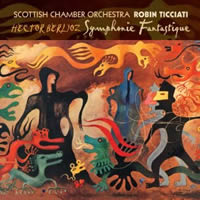 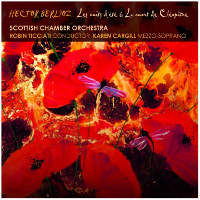