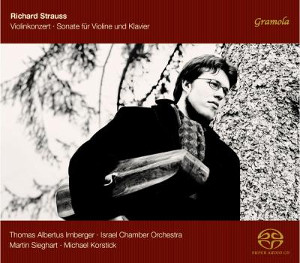 
Thomas Albertus Irnberger and the Israel Chamber Orchestra - they are an entente musicale of the highest standard, as is evinced by the previously released Violin Concertos by Hans Gál, Felix Mendelssohn-Bartholdy and Karl Goldmark. The most recent co-operation with the conductor Martin Sieghart has now produced this recording of the Violin Concerto in D minor op. 8 by the young Richard Strauss. This rarely heard work is followed by his Sonata for Violin and Piano in E flat major op. 18, which was completed only a few years later, in 1888. Irnberger's accompanist on the piano is Michael Korstick.

Compared with Richard Strauss' main orchestral works, his Violin Concerto in D minor of 1881 is small beer. Nevertheless, it has quite a good list of recordings, compared with early compositions by other composers. Derivative it maybe, influenced by Beethoven, Schumann and Mendelssohn, as well as Spohr and a number of violinist/composers of his day whose names are no longer current. But it's an accommodating piece of work, which after a few hearings, garners affection, even though its themes are not very memorable.

Remarkably, it was written into a classroom notebook during boring lessons at Grammar School, by the precocious young Strauss, two years before he left school. The violin writing is astonishing from one so young, and it poses considerable difficulties for the soloist. Strauss' orchestral scoring is also more than competent, and already he was writing beautifully for horns, particularly at the re-entry of the second subject in the first movement recapitulation, and in the latter part of the slow movement. The young composer was already including tributes to his father, a celebrated horn player, and he did this through his career.

Austrian soloist Thomas Albertus Irnberger has a world-wide reputation and a growing discography, including an award-winning performance of Hans Gál's violin concerto (Gal: Violin Concerto, Violin Sonatas - Irnberger / Paternostro). In that recording, he was accompanied by the Israel Chamber Orchestra, who also appear on the present Gramola disc. Bearing in mind Strauss' penchant for large symphony orchestras, one might question this as Strauss does not specify "for a small orchestra" as does Gál. In fact, the classical nature of the score seems to work quite well here, and has the advantage of not threatening to overcome the soloist. At the same time the balance of more prominent winds and fewer strings allows orchestral colours to shine through very clearly. The ICO is conducted by the remarkably versatile Martin Sieghart.

Ulf Hoelscher (RBCD, in Kempe's R Strauss box set) and Sara Chang (RBCD) are amongst a few others with well appointed recordings, but in my view Imberger has the more muscular and energetic approach, compared with Hoelscher's thin tone and fairly distant recording, and also avoids Chang's tendency to be over-sentimental.

Imberger presents a passionate first subject in the Concerto's first movement, melting into a seductively lyrical second theme. He brings a sense of sincerity, and dispatches the testing spans of virtuoso passage work, such as sliding double-stops, with seeming effortlessness. The Lento, also in D minor, has a gravitas remarkable for such a young composer, and the violin's accompaniment by the darkly coloured winds at the beginning sets the path for Imberger's tender and melancholy cantabile. Violas provide throaty counter-melodies, and the central dance-like section offers appropriate relaxation.

The final Rondo, marked presto, was composed by the schoolboy Strauss in his school holidays, and Imberger lets go with impish, tireless virtuosity, as if celebrating youthful freedom. The slower episodes are tuneful but simply played, avoiding sentimentality, before leaping forward once more into out-of-school jinks.

For Strauss' Violin Sonata, Op. 18, the recording team leave the moderate acoustic of Tel Aviv's Music Conservatory for the atmospheric Mozartsaal, Salzburg. Written at the same time as the early tone poems, this is the last work from Strauss' chamber music period, and probably the best. The structure is strongly classical sonata form, but stretched and enriched with the composer's developing personal form of inventiveness. There are a number of fine versions of this work, including Chung / Zimerman, Chang / Sawallisch and Holthe / Aspaas (Strauss / Enescu: Violin Sonatas - Holthe / Aspaas), but Imberger, partnered by the excellent Michael Korstik, offers formidable competition.

The duo's first movement takes wing after the heroic opening, with the piano firing off elaborately ornamented arpeggios around the violin's presentation of its melodic motifs. At times, the piano becomes very assertive, as if to put the violinist in his place. There is plenty of excellent give-and-take work between the two performers. Their slow movement is marvellously demure, and its melodies are first teasing and then warmly romantic. The sonata's central section has a pianistically pounding undertow recalling Schubert's Earl King, but dissolves into a reprise of the capricious, florid arpeggios, testing the timing of the duo's ensemble. Korstick sets a grim, dissonant and growling Andante opening to the Finale, which unexpectedly launches into an Allegro brimming with energy, soaring violin tunes ride above and across rippling piano waves. A very fine performance indeed.

I was in two minds about the recordings, which are both clean and immediate. But the violin in the concerto seems to have a very large sonic image, compared with the orchestra behind. Fairly close microphones catch breath intakes at the beginning of movements, and there are several places where a distracting buzzing resonance from the violin's body is caught. There isn't much air around the violin. In the Sonata, but it isn't so close as in the concerto, but the piano seems to me to be missing some of its deep bass resonance, giving it a rather dry sound in both 5.0 multichannel and stereo.

Having said this, many people will find these very good recordings, detailed and exciting. Packaging is excellent, with Imberger's own perceptive commentaries on the two works, in German, French and English. There are a few portrait photos, but i would have loved to see one of the concerto session, showing orchestra, soloist and microphones.

Not an essential purchase for the general collector, perhaps, but of much value for Straussians. I'm happy to recommend it, as such committed performances make these early works of the maestro "grow on you".