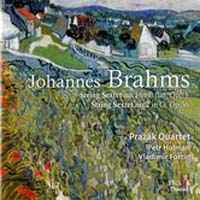 
Brahms imposed the sextet form, with the sweetness and variety of colours of both summer and autumn, as well as the power and brilliance of a string orchestra, owing to the importance of the low registers. Mendelssohn had revealed its possibilities of luminous, dreamy summer fêtes, Brahms the intensity of loves (The Lovers) then the innate nostalgia of the voices of violas and cellos, which allow for remaining under the spell of autumn activities and colours. Reger and Schönberg would be his sole heirs.

Brahms' two String Sextets make a delightful introduction for any listener taking up an exploration of chamber music. Written by Brahms in his early thirties, between 1860 and 1864/5, the sextets were next in line after publication of his two orchestral Serenades (Op. 11 & 16. These are touchingly informal suites for small orchestra, in which the composer showed his ample poetic lyricism and growing mastery of instrumental scoring. These new creative powers imbue both sextets, and reach a flowering in the second sextet, one of Brahms's finest chamber pieces.

Pursuing German classical style rather than French Romanticism, the inspiration for a sextet format, featuring pairs of violins, violas and cellos, came from Louis Spohr's ground-breaking Sextet Op. 120 in C. Brahms, like Spohr, was attracted by the deeper sonorities of an ensemble with extra cello and viola, in comparison with the "ideal" string balance of a standard string quartet.

This Praga disc is the tenth in their survey of the chamber music of Brahms. It features Praga's resident Pražák Quartet with guests from the Zemlinsky Quartet, cellist Vladimir Fortin and violist Petr Holman. The ensemble makes a sumptuous sound, which in the reverberant Dovinova in Prague sounds like a chamber string orchestra. The recording, with each player clearly focussed on the sound stage, is richly detailed and immediate, with plenty of ambiance coming from the surround speakers in multichannel mode.

The Pražák's main rival in these sextets is the glorious reading from the Raphael Ensemble on Hyperion (RBCD), which has been the foremost version so far. The only flaw of the highly-regarded Raphael's account is their inexplicable omission of the exposition repeat (the repeat is taken in the Second Sextet). Recognising Brahms' inspiration from Beethoven, especially in the First Sextet (Op. 18 in B flat), the Pražák take all of the set repeats in these string sextets. They use a very rich, vibrant and saturated tone which sometimes blurs or over-rides some internal detail, where Brahms uses the polyphony of the Renaissance and early Baroque, which he was studying at the time. In contrast, the Raphael Ensemble has a lighter, more open and transparent tone which speaks its true classical poise more clearly.

A further difference between the two ensembles is that the Pražák are often cavalier with their observance of Brahms' many dynamic marks, never managing a true pianissimo. Listen to the second theme of the first movement of the first sextet, played well above the marked pianissimo (and even louder in the exposition repeat). Mostly playing with a generalised mezzo forte which too easily becomes louder, the Pražák's dynamic range is notably narrower than the Raphael Ensemble's. They incorporate, to the letter, all of Brahms' dynamic directions, thus registering Brahms' schemes of contrast and drama.

The scherzo of the first Sextet is done brilliantly by the Raphael Ensemble. It is a Brahmsian homage to Beethoven with its dry wit drawn with short notes and syncopation. Compared with the Raphael's bite, the Pražák present it as more suave and smooth, thus loosing much it its Beethoven dry humour. For its D minor slow movement, Brahms presents us with a set of variations on the famous Baroque tune 'La Folia', and I have to say that the Pražák give a very fine performance here, evidently enjoying Brahms' challenges of progressively shortening the note lengths in running passages. But the Finale's Rondo (Poco Allegretto e grazioso), is smoothed over once more by the Pražák, while the Raphael are lighter-footed and more gently playful, giving the 2/4 main tune, full of mordents (brief trills), a charming lift.

In the Second Sextet, more colourful, complex, integrated and moulded than the First, Brahms shows evidence of having studied Schubert's late chamber music, including his String Quintet. Its first movement in particular is restless, more so with the Raphael than the Pražák. The first movement builds to a climax at the end of the exposition with the notes AGA-HE, a tone-code for the name AGATHE (b-natural in German is H). Here Brahms was remembering Agathe von Siebold, a professor's daughter and singer, to whom he had been secretly engaged.The climax is done with the simplest of means, yet contains great yearning emotion, arriving at the AGA-HE line high up the stave, underpinned with a poignant harmonic D standing in for the "T" underneath, thus AGADHE. The reserved dynamic of this climax is only from piano to forte, and is beautifully done by the Raphael players, while the Pražák start off at forte and rise to fortissimo. This overblows the sense of lingering and longing that Brahms had for Agathe. He wrote of this work "By this sextet, I have freed myself of my last love".

Sonically, this is probably the best recording available, with its truthful timbres and well-caught sound-stage. The Pražák's performances are mature and technically excellent, with a warmth and depth of tone which is most appealing.

Very enjoyable and well worth acquiring, as at the time, the only SACD rival is Brahms, Busch: String Sextets - Kölner Streichsextett, a fine performance of the First Sextet only. But the Raphael Ensemble still wear the crown for accuracy and depth.

These are old school European-tradition performances of Brahms sextets which is to say that they adopt conventional tempos and emphasize ensemble blend. I like this approach very much but it isn’t the only way to perform these works. The musical outlook is mainly sunny – gemutlichkeit – which works superbly well with Brahms music here as both pieces are in major keys. Both works came early in Brahms’s composing career when he was around 30 years old and each sextet possesses gobs of good, memorable melodic content. While neither work approaches the profundity of Brahms’s late chamber masterworks, they make for a splendid 75 minutes of satisfying one’s aural sweet tooth.

The Prazak Quartet is supplemented with the violist and cellist from the Zemlinsky Quartet. I have enjoyed many recordings by the Prazak and Zemlinsky quartets in recent years via Praga SACD’s and this SACD continues that admiration. The group demonstrates excellent ensemble and phrasing with well chosen dynamics throughout the musical canvas. I really don’t have any significant criticisms to levy at these performances other than to say that they seem to lack a bit of urgency in some sections. In all, they do this music proud and I’m glad to have this SACD in my collection.

The recording, as with so many of the Praga chamber music projects, was done in the Domovina Studios in Prague. It was engineered by Karel Soukenik and Vaclav Roubal, the stalwart recording team that have done so many Praga recordings. The booklet says “DSD Multi-channel” so I presume this is from a DSD master tape. Like a number of other recordings from this venue and team (e.g. the Haydn quartet recordings) this one suffers a bit from the “up close/far away” syndrome – the aural perspective of the quartet is quite close to the ensemble (plenty of string details are present) but the recording ambience gives the confusing perception of being farther back in the hall. I have said before in other reviews that I believe they are adding some artificial reverberation in the mixdown step to give a hall-like ambience that the studio cannot provide naturally. This just confuses the sonic picture and detracts from an otherwise very good recording. Perhaps the multi-channel perspective is improved over the stereo SACD tracks that I listen to. That said, this is a fine addition to the Praga catalog and I find it recommendable. 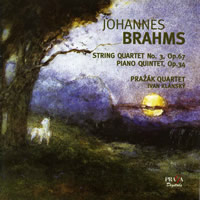 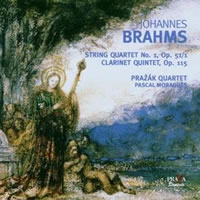 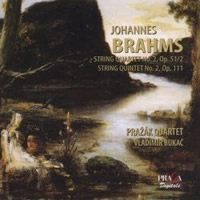