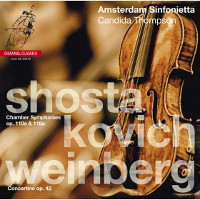 Shostakovich: Chamber Symphonies Opp. 110a, 118a
Weinberg: Concertino for Violin


This CD has been issued to mark the silver jubilee of the Amsterdam Sinfonietta.

In the first ten years this string ensemble was particularly known for its performances of twentieth-century repertoire from Eastern Europe. Under Lev Markiz, the first artistic director, the orchestra presented numerous national and international premieres by composers including Schnittke, Shostakovich, Ustvolskaya, Pärt and Denisov. Although the repertoire of Amsterdam Sinfonietta has considerably broadened in the past years, it recently presented world premieres by Gubaidulina, Mansoerjan and Vasks. Works by Mieczysław Weinberg have included the west-European premiere of his Concertino in the Amsterdam Concertgebouw in 2009, with the present artistic director Candida Thompson as soloist.

This anniversary recording features Weinberg’s Concertino and two now world-famous Chamber Symphonies by Dmitri Shostakovich. The three works are not only related by their musical language, but also by a lifelong friendship between the two composers. Shostakovich even dedicated his Chamber Symphony Op. 118a to Weinberg. Amsterdam Sinfonietta dedicates this CD recording to all its musical friends – both onstage and backstage – who have helped to bring the ensemble where it is today.

This new SACD from Candida Thompson and the Amsterdam Sinfonietta celebrates the 25th anniversary of this exceptional ensemble's foundation in 1988, and the programme echoes one of their previous releases of transcriptions for string orchestra of the 2nd and 4th of Shostakovich's fifteen string quartets Shostakovich: String Quartets 2 & 4 - Amsterdam Sinfonietta.

This time, however, they perform the familiar Rudolf Barshai arrangements of Quartets 8 and 10, both of which had the imprimatur of the composer. Neither the Chamber Symphony Op110a nor the Chamber Symphony 118a (often called the Symphony for Strings) are new to SACD and these Amsterdam performances compete directly for attention with those by the Rotterdam Chamber Orchestra on Talent Records Shostakovich: The Barshai Arrangements - Conrad van Alphen. Both recordings are equally recommendable, so the couplings will probably be the deciding factor for most listeners, although it is worth pointing out that Conrad van Alphen, the conductor on the Talent disc, adopts a wider variation of tempi in both works.

Here the 22 players of the Amsterdam Sinfonietta lavish their usual scrupulous care for dynamics and refinement of sound on the often emotionally searing music of these quartets and manage to combine to thrilling effect the flexibility and precision of a string quartet with the weight and impact of a full string orchestra; for example in the biting sforzandi of the 'Allegro furioso' of Op.118a . The DSD recordings, made in two different locations, are clear and wide ranging in the best Channel manner.

Between the often intense bleakness of the two Chamber Symphonies the untroubled and somewhat pastoral sounding opening of 'Weinberg's 'Concertino for Violin and String Orchestra' comes as a welcome contrast. This lyrical and appealing work dates from 1948, but it was not published until 2007. Each of its outer movements have a fluent and engaging charm whilst the second movement (Lento) opens with a cadenza for the soloist before the emergence of a wistful cantilena. Candida Thompson gives a lovely account of this work and the recording provides an exemplary balance between soloist and orchestra.

Also included with this release is a beautifully filmed DVD entitled 'Amsterdam Sinfonietta Revealed – a portrait by Claire Pijman' that explores the painstaking rehearsal process and collective discussions of the players as they undertake a performance of Op110a in the Concertgebouw, Amsterdam. The absolute rapport between these dedicated musicians is quite evident as is their enjoyment of everything they perform.

This is yet another outstanding addition to the Amsterdam Sinfonietta's peerless discography.