As detailed, this is a PCM recording, but in inspecting the SACD waveform it is clearly mastered from Redbook CD 44.1khz PCM sources - so the stereo layer of this SACD is no ...

Overall I've been a very big fan of Paavo Järvi's recordings of Bruckner. I'm surprised to see this full set because RCA has not released Symphonies 0 and 8 individually. ...

DYB, I think it's apparently not intended by this side to allow private communication between members. I'd enjoy some private discussion with a few members here. - I have no ... 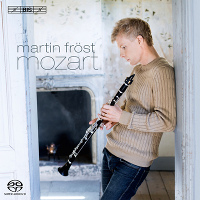 
One of a small handful of truly international wind players, Martin Fröst mesmerizes audiences throughout the world, whether he is performing one of the several concertos that have been composed especially for him or core repertoire such as the sonatas by Brahms, the concertante pieces by Weber or, indeed, the clarinet works by W.A. Mozart. Released 10 years ago, in 2003, Fröst’s first recording of the Concerto in A major is one of the best-selling discs in BIS’ history.

Returning to this glorious work, he now also directs the eminent Deutsche Kammerphilharmonie Bremen himself. For the couplings on this very special release, Martin Fröst has assembled a truly star-studded group of musician friends, with Leif Ove Andsnes and Antoine Tamestit partnering him in the so-called Kegelstatt Trio, and with Janine Jansen, Boris Brovtsyn, Maxim Rysanov and Torleif Thedéen joining him in the rarely heard Allegro for Clarinet and String Quartet, K Anh.91. Probably composed in 1787 – two years before the famous Quintet in A major for the same forces – the Allegro, in the extant autograph manuscript, breaks off after 93 bars, or three bars into the development section.

If Mozart actually completed the movement and for what purpose he intended it isn't known, but the completion made by Robert Levin adds to the modern clarinetist’s repertoire a work of great imagination that would otherwise have languished unperformed. 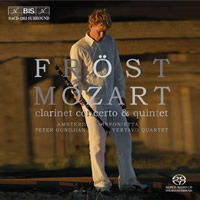