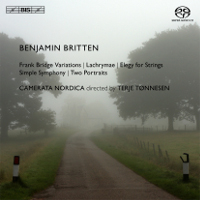 
‘Composing is like driving down a foggy road toward a house’, Benjamin Britten once said: ‘Slowly you see more details of the house – the colour of the slates and bricks, the shape of the windows.’ The comparison is interesting, not least because certain defining qualities of Britten’s music – brilliance and wit, clarity and luminosity – might easily be taken to be the results of a more direct and intuitive creational process.

It is also slightly surprising, coming from a composer who had been strikingly precocious in his youth – the apparent ease with which Britten as a young boy wrote a large amount of music brings Mendelssohn or Mozart to mind. This collection of works for string orchestra combines two of Britten’s first master-pieces, Simple Symphony and the Frank Bridge Variations, with the even earlier Elegy for Strings – recorded here for the first time – and Two Portraits, composed between the ages of 14-16.

The second of the Portraits is actually a self-portrait, with a solo part for the viola – Britten’s own instrument – here performed by Catherine Bullock, who is also the soloist in the composer’s Lachrymae. Subtitled ‘reflections on a song of John Dowland’, this piece is a later one, originally composed for viola and piano in 1950, but Britten returned to it shortly before his death in 1976, recasting it for solo viola and small string orchestra.

Directed by the Norwegian violinist Terje Tønnesen, the Swedish string ensemble Camerata Nordica performs this programme with an engaging directness and striking virtuosity – qualities which no doubt contributed to the team being entrusted by the Britten-Pears Foundation with making the world première recording of the Elegy, as well as giving its first public performance during the 2013 BBC Proms.

Here is a handy package of Britten's music for strings, including a Première recording of an Elegy by the composer at the age of 14. It is, of course another celebration of the 100th Anniversary of Britten's birth in 1913. The celebrants, as it were, are the esteemed Camerata Nordica, based in south-east Sweden. Their conductor and highly experienced Artistic Director, Norway's Terje Tønnesen, founded the Norwegian Chamber Orchestra and is currently leader of the Oslo Philharmonic.

This well-packed disc (81'04") has two of Britten's youthful pieces for strings, which are generally popular and much recorded, alongside three of his lesser-known but more mature compositions. This is my first encounter with the Camerata, and I must say that I am very impressed indeed. In technique and commitment, they are on a par with their colleagues across the Baltic to the west: Finland's Ostrobothnian Chamber Orchestra.

While Britten's own recordings of Simple Symphony, Variations on a Theme of Frank Bridge and Lachrymae are of course supreme, Camerata show an impressive grip on the Britten idiom and present here some very fine and original readings which provide deeply satisfying listening, even for the popular pieces. Their clean ensemble, sharp attack and rich tonal values are characteristic, while under Tønnesen's inspired direction their pacing and scrupulously observed dynamic levels (with breath-taking hushed tones, even in pizzicato) are memorable features of this programme.

Britten's inspired tribute to his first teacher and mentor, Frank Bridge, is a multi-coloured set of short variations, many of them taking off classical dance formats, which Britten proceeds to de-construct with a wicked sense of humour. Camerata players don't miss a single beat of this sometimes acerbic wit, hamming up of the frivolous movements (the take-down of a Viennese waltz is hilarious, with its counter-schmaltz crushing dissonances at Vivace speed), but giving the more serious movements a depth which we rarely hear. Funeral March, for example, is imbued with stark anger and utter grief. Fugue and Finale swings brilliantly between waspish and impish, with a passionate elegy of almost Mahlerian intensity sinking to silence. Energy is restored suddenly in the last few bars, all instruments leaping forward to a terminal grand D major chord, as if the sun comes out. Full marks for characterisation and freshness in execution.

Simple Symphony continues the sunshine, played with a light touch but true virtuosity where needed. The Bourrée is indeed boisterous, and Playful Pizzicato beautifully nuanced in touch and dynamics (although its Trio is notably slower than usual, and very obvious follows Britten's instruction "Very Heavy", which gives the English playground tune an unusual weight). Sentimental Saraband is bowed with such rich tone and ripe expression that it goes much deeper than mere sentimentality. Camerata's Frolicsome Finale, needless to say, is fizzing!

Lachrymae (1950, arr. for solo viola and strings in 1976) is a manifestation of Britten's life-long distrust of contemporary composers - so much so that he went right back into musical history for examplars, such as English lutenist John Dowland and royal employee Henry Purcell. Dowland's perpetual melancholy attracted himin particular, hence his "Reflections on a song of John Dowland". The use of a solo viola here is not just because of its darker voice, but it was Britten's own instrument, and personalises this piece. In some respects, 'Lachrymae' sounds like a deep-seated psychological improvisation, and can become uncomfortable harmonically. However, soloist Catherine Bullock's Guadagnini viola of 1794 has the right warmth and gravitas in its wide tonal range, thanks to her insightful progress through Britten's soul journey. In passing, it is worth recording that the Camerata viola section acquits itself magnificently in this and all the other works on this disc.

Britten disparaged Elgar's Enigma Variations, calling them "sentimental", but he was attracted to the idea of making personal portraits in music. In between school and entering the Royal College of Music in 1930, Britten envisaged writing a trio of such portraits, with himself in the middle of tow of his friends. Only two of these were completed. They were later published and given the title "Two Portraits". Camerata provide convincing and insightful interpretations of David Layton's and the composer's personality, as seen by a young man about to rise rapidly into his stellar professional position. The solo viola occurs here too.

Last on the disc is the formerly never-played Elegy for Strings, written when Britten was all of 14 years old. It was first performed in 2013 at one of the BBC's Promenade Concerts (by Camerata Nordica) and has its recording début here. Not a traditionally mournful musical Elegy, it is more like a literary summary of a life, as read at a funeral. There is a sense of urgency and controlled energy. String textures are richly laid out and reach a spectacular climax in which each of the 22 players has an individual part. Although the piece has a tendency to wander somewhat, it is deeply felt and given an affectionate performance which may well endear it to the listening public.

Despite compilation of recording sessions at two Swedish churches between 2010-2013, the recordings are mostly up to the best BIS standards. The Bridge Variations and Simple Symphony were recorded at 44.1/24, the rest at 96/24. It is a useful disc for checking if you can recognise the difference when played on your system! Balances are generally quite forward, with good spatial focus of each section in the orchestra, and a pleasing ambient halo. Lachrymae, however, seemed to me notably closer, so the solo viola had a larger than life presence which I found somewhat intimidating, ameliorated somewhat by reducing the volume for that track. For those HIFI buffs who frequently complain that BIS recordings are weak in the bass, the double basses and cellos of the Camerata are very much in the sonic picture here, especially the string basses, which feature so much in Britten, digging into their strings with gusto, or mastering hushed solos with great expression. In 96/24, their sound becomes smoother,more rounded and has deeper sonority and acoustic response.

The musicianship of Tønnesen and Camerata Nordica ensure that the vibrant presence of Benjamin Britten's personality imbues every moment of this disc. It is a fine contribution to the 100th Anniversary celebrations, and is self-recommending. I was very impressed by Camerata and their conductor, and look forward to some more recordings in collaboration.