FYI - Berlin Classics × TOWER RECORDS is having a sale right now, which include most of the Sanderling sets, only exception is the Brahmas set. I ordered the Brahms, Mahler, ... 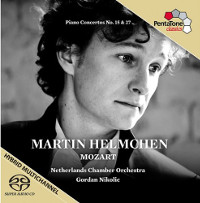 This, the second volume in a very slowly evolving series of Mozart piano concertos from Martin Helmchen and the NCO, is a delight in every sense. My personal preference is to hear these concerti performed on a modern piano accompanied by an orchestra playing modern instruments. This is the case on this SACD – Helmchen plays a full bodied Steinway grand piano and the Netherlands Chamber Orchestra, led by Gordon Nikolic from the first violin desk, sounds appropriately robust throughout. None of the miserable scraping and tinkling to be heard here! Whether or not these performances are “period influenced” I cannot say – just suffice to say that they represent music making of the highest order.

K.450 in B-flat (no. 15) comes from that period in Mozart’s compositional life in the early 1780’s where his grasp of the medium was flourishing, producing a series of concertos that were unique in their virtuosity and inventiveness. It is loaded with memorable tunes for both the soloist and orchestra. I marvel at the integration of piano with orchestra that Helmchen and Nikolic have achieved. Helmchen plays Mozart’s familiar cadenza in the first movement and to excellent effect. Top of the heap stuff here.

K.595, also in B-flat (no.27), was the last piano concerto Mozart composed, coming 7 years after K.450. This is from a master at the top of his game and one of the very best classical era concertos extant. These players exude brilliance and joy throughout the performance. The give and take between Helmchen and the band is a marvel to experience. It really doesn’t get any better than what is on display here – masterful artistry all around. Kudos to them for a job well done.

Lastly, I must say that sonically this SACD is nearly perfect. The works were recorded in the NCO’s home performance space and from the results it sounds like a perfect concert hall for this music. The booklet doesn’t say whether this is a dsd master but Pentatone are known to record in dsd so I presume this is as well. The sound is truly outstanding – the piano tone is sumptuous, orchestral strings never suffer from the typical RBCD digital artifacts and the balance of direct and hall sound is perfection.

Is there anything at all to complain about? Well, there are a few rare spots where Helmchen’s hand coordination in K.450 was ever so slightly out of sync during some of the fast runs. And, with a total time of 55 minutes, another Mozart concerto could have been included. After all, it’s been about 6 years from when Volume 1 was released – at this rate it will be many years before the series is completed (if they are even contemplating a series). All I can say is I hope they do continue to record more concerti - the sooner the better!