Britten: The Turn of the Screw - Farnes 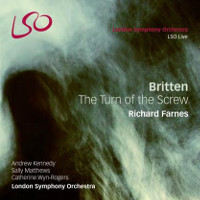 Britten: The Turn of the Screw


Released in celebration of the Britten anniversary year, Richard Farnes, the Music Director of Opera North who led their critically acclaimed production of The Turn of the Screw in 2010, conducts an all-English cast in Britten’s most ingeniously crafted opera, including Andrew Kennedy, Sally Matthews, and 11-year old Michael Clayton-Jolly in the role of Miles. Originally scheduled to be conducted by Sir Colin Davis, Richard Farnes was the natural replacement, himself having been mentored by the late conductor.

In 1932, the 18-year-old Britten heard on the radio ‘a wonderful, impressive but terribly eerie and scary play The Turn of the Screw by Henry James.’ Britten’s version of the ghost story, premiered in 1954, is a chamber opera in a prologue and two acts. The opera tells the story of a Governess and a housekeeper Mrs Grose who vow to protect two children, Miles and Flora from the strange happenings that occur in the grounds of their English country house.

Just in time for the end of the Britten centenary celebrations comes this fine recording from LSO Live of Britten's spookiest opera 'The Turn of the Screw'. The performances from which this recording was made took place in the Barbican (April 16 & 18, 2013) and were originally planned to be conducted by Sir Colin Davis whose death two days earlier no doubt made this an especially poignant occasion for all concerned.

As long ago as 1932 Britten had heard a radio dramatisation of Henry James's novella 'The Turn of the Screw' and it made an immediate impression on his consciousness. He described it in his diary as “ a wonderful impressive but terribly eerie and scary play”. His collaboration with his librettist Myfanwy Piper some twenty years later yielded a chilling and ambiguous masterpiece involving one of Britten's favourite themes, the corruption of innocence, that continues to fascinate audiences today.

There is a cinematic quality to this two-act opera with its Prologue and sixteen rapidly changing scenes, each separated by a series of fifteen orchestral variations which is probably why a number of versions of it have appeared on film or DVD. The relative success of these depends on the ability of the director and the set designer to depict convincingly both the location of each scene and more importantly create a suitable visual atmosphere for it – by no means an easy task. No such problems need bother the audio only listener whose own level of imagination and immersion in Britten's marvellous score is all that is needed to let the disquieting story make its mark.

This new recording, a first on SACD, is strongly cast. From the beautifully sung opening Prologue it is apparent that Andrew Kennedy is an excellent choice for the work's only male role – that of the ghost of the evil Peter Quint. He sings throughout with much beauty of tone yet still conveys Quint's insidious malevolence without resort to any caricature. Sally Mathews, as the inexperienced governess to the children Miles and Flora, gives a searing portrayal of this complex character – her anxiety in the opening scene gradually giving way to horror at the realisation of the children's corruption by evil forces. Miles is sung with commendable accuracy by the 11-year-old Michael Clayton-Jolly whose voice is occasionally overwhelmed both by the orchestra and also by that of his sister Flora – a youthful voiced Lucy Hall. The cast is completed by the reliable Catherine Wyn-Rogers as the housekeeper Mrs. Grose and the riveting characterisation of Miss Jessel by Katherine Broderick.

Richard Farnes, the current Music Director of Opera North, directs a detailed and well-paced performance in which the collective and individual playing of his chamber orchestra made up of 17 members of the LSO could hardly be bettered. It is pleasing, for once, to report that the production is enhanced rather than diminished by the Barbican acoustic and that Britten's pellucid scoring is marvellously etched by the clarity and immediacy of the 5.1 DSD recording. The two-disc set includes informative and thought-provoking notes on the work by Gavin Plumley as well as the full libretto.

Listeners (and viewers) are almost spoilt for choice with the many very fine recordings of this opera currently available (eleven at a last count, including that conducted by the composer), but this new one definitely deserves inclusion amongst the best of them.