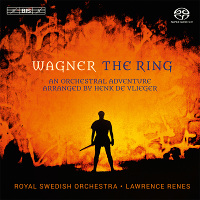 WAGNER, Richard (1813–83) The Ring - An Orchestral Adventure based on Richard Wagner arranged by Henk de Vlieger (b.1953) (Schott Music)


Henk de Vlieger's orchestral arrangement of Richard Wagner's Ring Cycle boils down this monumental music drama in four parts to a symphonic poem with a duration of a fifteenth of the original score. Unlike certain other arrangements, de Vlieger's follows the chronology of the operas so that the irrevocable process towards the twilight of the gods is clearly delineated.

His method has been to select and link together the most important orchestral passages in the score, already closely interconnected as a result of Wagner’s leitmotif technique The excerpts have in most cases been taken over without alterations; only occasionally has an essential vocal line been replaced by wind
instruments.

Quite possibly, Wagner himself would have objected to the undertaking, but in fact one of his own strongly held convictions was that the text – or rather its content – should be continuously present, by means of the hidden-away orchestra exploring the dramatic background to the action presented on stage.

With this orchestral arrangement the turn has thus come for the Royal Swedish Orchestra to take its place on centre stage, in music which has been part of its repertoire for close to 120 years at the Royal Swedish Opera in Stockholm. (Some of that impressive history is reflected in the CD booklet through images from
Ring productions past and present.)

The conductor Lawrence Renes, recently named music director at the Royal Swedish Opera, has admired de Vlieger's arrangement since it was premièred, in 1991, by his own mentor, the conductor Edo de Waart. The arrangement has been recorded previously, but never before by a bona fide opera orchestra. The result is indeed an adventure, as well as a sonic spectacular, and an excellent calling card for a fine orchestra all too often relegated to the shadows.

The Royal Swedish Opera has a long and distinguished tradition of Wagner performances, as the eight pages of fascinating photographs in the liner notes of this excellent BIS SACD suggest. The productions illustrated range from a 1908 Götterdämmerung ( all horns and winged helmets) to the current, less representational style.

This disc, however, is of Wagner without voices and provides the opportunity for the Royal Swedish Orchestra under its current music director, the charismatic conductor Lawrence Renes, to show its mettle in Henk de Vlieger's hour long synthesis of the Ring entitled 'The Ring An Orchestral Adventure'.

The Dutch composer and percussionist Henk de Vlieger made this arrangement of music from the four operas that make up 'Der Ring des Nibelungen' in 1991 at the request of the conductor Edo de Waart, who has championed it many times. Though performed in one continuous movement, it is sub-divided into 14 sections each of which has a title that gives some indication of the key transitions to those already familiar with the story-line of Wagner's magnum opus.

Renes's performance is finely conceived with a palpable sense of drama and his orchestra obviously includes some excellent musicians including Kristina Kärlin who fearlessly delivers Siegfried's horn calls ( Tracks 8 and 11) with absolute assurance. One notable feature for those listening in surround, is that in the 'Nibelheim' section (Track 3) the 'Nibelung anvils' emerge from all speakers, thus immersing the listener in a terrific clangor. Elsewhere the BIS 5.0 channel (96kHz/24-bit) recording places the orchestra between the front speakers with the rears providing some helpful ambient information in the slightly dry acoustic of Stockholm' s Concert Hall.

Rather surprisingly this is the second recording of de Vlieger's arrangement to appear on SACD. It vies for any prospective purchaser's attention with the superb Chandos recording made in 2007 by Neeme Järvi and the Royal Scottish National Orchestra Wagner: The Ring - An Orchestral Adventure - Järvi . That disc does also include (a somewhat quirky performance) of the Siegfried Idyll. The BIS recording has no fill-up.

Making a clear decision between these two SACD is almost impossible as both are recommendable. Some may prefer the gravitas of Renes's steady pacing against Järvi's macho and purposeful conducting, but for this listener the committed playing of the RSNO captured by Chandos in a more open and warm acoustic wins the day by a short margin. 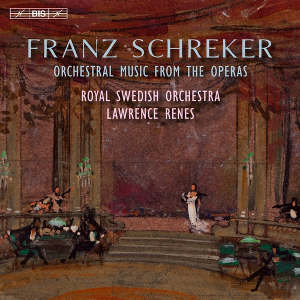