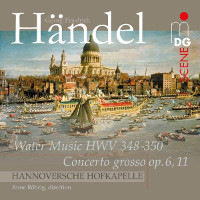 
By George, he's got it!
It was one of those times when Dad has to show his son who calls the shots! King George I was a man of simple tastes, really, but the peacock displays of his eldest son, the Prince of Wales, provoked a right royal response. And so the famous Mr Handel was commissioned to write a splendid suite for a festivity on the Thames that would set new standards in every way. Handel fulfilled the King's wishes to his entire satisfaction, and the Hannoversche Hofkapelle, legitimate successors to their waterborne London colleagues, have newly recorded his "Celebrated Water Musick" – with insights that take us by surprise even today.

Speakers Corner
Even the question of the order in which the movements are to be played has vexed generations of scholars and performers. The Hannoversche Hofkapelle has opted, with some historical plausibility, for lively variety. Hark how the trumpets suddenly enter and spread a festive sheen in the "Trumpet Minuet", the glory of the Baroque! To the utter astonishment of the English audience, Handel has imported two German hunting horns, not at all what England expects – and one can practically hear the "Ahs!" and "Ohs!" that accompany them …

Roundabout
Dramatic episodes and comic scenes are the seasoned opera writer's bread and butter, and Handel was no exception. Two twittering piccolos are accompanied by a growling bassoon and low strings, an expressive oboe solo seems to have come straight from the Haymarket Theatre, and there are numerous allusions to his own operas and his rivals' stage works. The show begins with a reference to the great Purcell – homage to the host nation's honoured traditions.

Proms
The Hannoversche Hofkapelle upholds the tradition of its Hanoverian English forebears. Their great expertise in period performance practice raises these accomplished artists to new heights. Amazing to think that the "Water Music" is the Hannoversche Hofkapelle's instrumental CD debut – nothing but sparkling 2+2+2® spatial sound will do justice to such an occasion!