LAWO replied yesterday with the following: "I checked this CD in our store, and it says SACD on the cover, so it definitely is a SACD. I haven’t heard of two different ...

I had read somewhere, (it might have been SA-CD.net) that the remastering of this recording was spectacular. Unfortunately, I haven't seen that comment anywhere else. Also, I ... 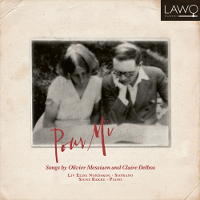 
Who was Mi, who inspired Messiaen to write the lovely and intricate work Poèmes pour Mi? This was one of the questions Liv Elise Nordskog and Signe Bakke asked when they began work on this album, after having immersed themselves in Messiaen's rich and diverse tonal world for many years.

The poet Cécile Sauvage was Messiaen s mother. Her cycle of poems dating from 1908, L'Âme en Bourgeon (The Soul in Bud) was written while she was awaiting the birth of her son. Almost 30 years later, Olivier Messiaen and his wife, violinist and composer Claire Delbos, were themselves expecting a child. During this time, Delbos set to music the poem cycle of her deceased mother-in-law. At the same time, Messiaen composed a song cycle entitled Poèmes pour Mi his pet name for his wife Claire.

L'Âme en Bourgeon and Poèmes pour Mi were premiered at the same concert in Paris in 1937. It is the only time the two works are known to have been performed Olivier MESSIAEN together until the recording of this CD!

Oliver Messiaen's compositiions for voice are much less widely known than his instrumental works. However, they span 40 years and comprise a fifth of his total output. Norwegian soprano Liv Elise Nordskog and her piano accompanist Signe Bukka have taken a particular interest in the songs in this programme, taking them on recital tours, and now setting them down in SA-CD. Two of the works, Messiaen's 'Poèmes pour Mi' and Claire Delbos's 'L'Âme en Bourgeon' were premièred at the same concert in Paris in 1937. The singer was Marcelle Bunlet, with Messiaen at the piano, and apparently the two works have not been performed together since - an incentive for Nordskog and Bakke to make this recording.

The three song sets are related to one another in various ways, as outlined in the excellent booklet (in Norwegian and English). The poet Cécile Sauvage (1883-1927) was Messiaen's mother. Her poems were used by Claire Delbos (Messiaen's wife)' in 'L'Âme en Bourgeon' while at the same time Messiaen was writing 'Poèmes pour Mi' with his own poetry and music. An earlier song cycle, from 1930, Trois Mélodies, uses one of his mother's poems, 'La Sourire' (The Smile) at the centre of this work, flanked by songs based on his own poetry. In a sense, the Trois Mélodies became sketches for the 1936 'Poèmes pour Mi'.

Messiaen (1908-1992) had a fairly uninteresting life as a professional musician: teaching, composing and playing the organ at the Church of the Holy Spirit in Paris. In his biography are two remarkable events; the sad story of his wife, the poet Claire Delbos, who suffered from cerebral atrophy and ended her life in a nursing home, and an intensely dramatic episode when he wrote and had played 'Quartet for the End of Time' at Stalag VIIIA. As a composer and poet, he was a singular man, developing his own characteristic style within the turbulence of C20th music. The root of all his art was an unwavering and intense immersion in the Roman Catholic faith. God spoke to Messiaen through sounding tones in chants, the might of an organ, the output of exotic percussion instruments or the song of birds. He observed that most people had little no knowledge of these, so his duty was to present them with the various essences of sound that he had himself gathered and garnished with his music.

Songs "Pour Mi" has all these elements and more; Indian rhythms, monody, modes, antiphonal exchanges and soloistic use of instruments. These song-gems provide much difficulty for both soprano and pianist. There are no time signatures for guidance so bar lines vary as melodies follow speech rhythms in the poetry, often interpolated with ornamentation or special emphases.

The singer also has to have a very flexible voice and range. Nordskog, for example, is sometimes called to use her rich chest voice, as well as pinging pure toned high notes. Dynamics range between ppp and fff for the voice as well as for the piano. Taking all this in her stride, Nordskog invests her lines with clear and articulate expressiveness, managing the French very idiomatically. The pianist too is often presented with concerto-level technicalities, and she provides much of the complex rhythmic undertow of the vocal line, sometimes echoing vocal lines, others opposing, and, of course, she has to execute Messiaen's complex and exotic harmonies, which involve chord notations bristling with accidental sharps and flats. A significant number of pre-recording concerts given by Nordskog and Bakke has greatly benefited the breadth and detail of Nordskog and Bakke performances, and they sail seamlessly through the difficulties to present the music with authoritative and joyful musicianship.

Lawo engineers place the musicians in the cool reverberance of the Sofienberg Church in Oslo with a realistic balance and, in multichannel, a fine perspective. Every nuance of Messiaen's impressionism, praise for and love of God is captured as it wells out from voice and piano into the Church's bloom, an most appropriate venue for this Divine-seeking material. For those to whom this music is unfamiliar, a splendidly detailed account of the music appears in the booklet, providing context and detailed meaning for each song. The only translation of the poems from French is into Norwegian (texts of other translations can be found at various localities on the Net).

Bakke and Nordskog communicate their deep understanding of Messiaen's milieu and their strong affection for these songs. This music is indeed rarely heard in concert and even rarer on recordings, and Lawo's issuing it on SA-CD with multichannel as well as stereo is a real gift to listeners.

Highly recommended to those interested in C20th music in general or more specifically to Messaien's take on the French Chanson of that era.