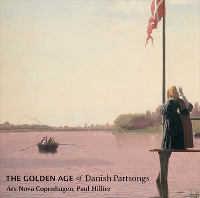 
The Danish Golden Age in the first half of the 19th century is known as a period with an abundance of artistic expression, famous talents such as Hans Christian Andersen, Søren Kierke­gaard and early Romantic composers like C.E.F. Weyse and Niels W. Gade. But according to the British choral director Paul Hillier, we can in fact speak of a continued ‘ Golden Age’ for Danish choral music today – which is why this collection of Hillier’s Danish Golden Age jewels with Ars Nova Copenhagen includes Classical and Romantic works as well as music from the subsequent generations right up until our own time.

A "Golden Age" is a term indicating a period in a country's history which is particularly rich in cultural development, particularly artistic expression. In the case of Denmark, this is applied to the first half of the 19th century, replete with famous talents such as Hans Christian Andersen, Søren Kierke­gaard and early Romantic composers like C.E.F. Weyse and Niels W. Gade.

The problem with applying a Golden Age assignation is that it implies that standards fall afterwards. However, prestigious choir master and Director and Chief Conductor of Ars Nova Copenhagen, Paul Hiller, has come to the rescue. With the enormous amount of information he has gained about Danish partsongs from research, programme-building and performing with the choir, he has affirmed that as far as choral compositions go, the Golden Age is still in effect. In this carefully-wrought and superbly performed selection of choral works from the early 1800s when folk songs were re-discovered (C.E.F. Weyse, Friedrich Kuhlau) to modern times (Ib Nørholm, 1994), Ars Nova supply convincing evidence for Golden Age continuation.

The standard of singing in this programme is breath-taking. Radiant with deep respect and understanding of the folklore, poetry and love of the Danish countryside, Ars Nova's 'a cappella' voices mingle superbly to celebrate the work of the listed composers. No wonder that the choir has such a world-wide reputation for excellence.

From the atmospheric cover painting by Christian Købke (1838), through Jens Cornelius' lucid music guide (in English and Danish) to the complete song texts in both languages, DaCapo's digipak is elegantly presented. The recording venue was Garnisons Kirke, a magnificent Copenhagen church in Dutch Baroque style, providing an acoustic which illuminates rather than confuses. Sourced in DXD, the clarity, balance and naturalness of the sound is exemplary, leaving the mind to attend fully to the beauty and purity of the singing.

Anyone at all interested in choral singing will surely take this distinguished music-making to heart. I found it to be an unmitigated delight and therefore recommend it unreservedly.