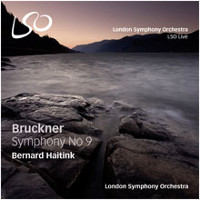 
Bernard Haitink is internationally renowned for his interpretations of Bruckner and is widely recognised as the world’s leading Bruckner conductor.

Bruckner’s symphonies are often described as ‘Gothic cathedrals in sound,’ an apt description considering the composer’s devout faith and early vocation as an organist. He died before he could finish his Symphony No 9 but within its three movements can be found some of his most complete music, imbued with a sense of deep solace and resolution.

For devotees of the symphonies of Anton Bruckner it is heart-warming that Bernard Haitink, fast approaching his 85th birthday, is revisiting these works he has conducted and recorded many times over the past half century. What is especially remarkable is that, in these live performances with the London Symphony Orchestra, Haitink is finding new and deeper insights into the music, as this latest LSO Live release clearly shows.

Haitink has no truck with the many attempts at completion of the Finale of Bruckner's 9th Symphony and on this SACD taken from performances given in the Barbican Hall in February 2013 the work is given in the familiar three-movement Nowak edition of 1951.

Haitink's spacious account is in marked contrast to that which he recorded with the Concertgebouw Orchestra for Philips in 1965 as comparisons with the respective timings indicate.

But such is Haitink's mesmeric control of the symphonic structure that not for an instant did the performance ever seem too slow, quite the contrary in fact. Both the opening movement and the wonderful final 'Adagio' unfold with a resolute purpose and a natural underlying pulse that only the greatest Bruckner conductors can achieve. In between these two monumental edifices, the 'Scherzo' is delivered with relentless thrust and precision. The response of the LSO players to their veteran conductor is unconditional commitment. He knows exactly what he wants from them and they deliver it in spades. The large LSO brass section, especially the four noble sounding Wagner tubas, cover themselves in glory, capping climaxes that threaten to overwhelm the listener with their shattering power.

As on Haitink's 2011 release of Bruckner's 4th Symphony Bruckner: Symphony No. 4 - Haitink the engineers have done an excellent job in achieving a convincing sense of an ample acoustic space in the difficult Barbican acoustic. The 5.0 multi-channel recording is clean with a pleasing presence, and, in spite of the huge dynamic range, it remains free from congestion.

This is an utterly compelling performance of Bruckner's valedictory symphony, and though one envies the audience who were lucky enough to attend these concerts, for those who didn't this fine LSO Live release is the next best thing. 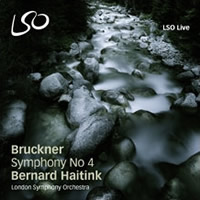