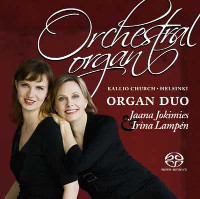 The expertise of Organ Duo's Jaana Jokimenies and Irini Lampén must have surprised many listeners with their first SA-CD, Organ Duo - Jaana Jokimies & Irina Lampén. Few record collectors are aware that there is a repertoire for four hands and organ, albeit fairly small compared with that for four hands and piano, itself spawned by a large publishing industry in the late C19th and C20th.

An organ duo performs not just with four hands and one keyboard, but four hands with three or more keyboards, plus a pedal board with four feet, and a large range of registers which offer, in the best organs, an astonishing range of timbres to apply to their music-making. In order to control their complex instrument, duo players need to have agreed not only overall interpretation, but the smallest details of execution, each having decided and agreed upon which keyboard and which registration for their parts before starting to play.

Having thoroughly enjoyed their first album, I'm delighted that they have recorded another blissfully unhackneyed and brilliantly executed programme. As before, they gave constructed a mixture of pieces; those which are by and large written for organ duo and those which are transcriptions of symphonic works. This time, they are in Helsinki's Kallio Church, where they have a three manual Main Organ by Åkerman & Lund 1995 with Late French Romantic acoutrements , and also a much smaller two manual Choir Organ by Kangasala 1987 with a spicy set of Baroque registers and very responsive keyboarding.

Jaana and Irina immediately establish their Finnish location with a stunning rendition of Sibelius' famous Finlandia, Op. 26. I've listened to this half-a-dozen times, and its opening chords and silences still raise the hairs on the back of my neck. The extra player gives very dense and dark textures, with the deep (32') pedals giving an even wider power and range than the orchestral brass. These dark chordal sequences are given an tension which is almost unbearable, winding up to triumphant blazing mixtures, in sharp contrast with the culminative hymn tune's hushed entry, floating from 8' registers which are well towards the back of the organ, as revealed on the magnificent multitrack recording. The big reeds, including astonishing trills on deep pedals, roar triumphantly to the end.

Lightening the programme, Saint-Saëns' Danse macabre Op 40, in an arrangement by Wendy Hiscocks, is full of colour and character. The Danse is rhythmically lilting, humorous, and at the start, is atmospherically distanced before the main tune steps forward. Technically, there are some effortless glissandi, not to mention clear articulation of rapid passages. The Duo certainly capture the magic and tongue-in-cheek fun of Saint-Saëns mini-tone poem.

Beethoven is not a composer we generally associate with the organ, but he was a talented organist in his early days. Although he wrote little for the instrument, Beethoven composed several pieces for a mechanical clock-organ in 1799; the first of these is the Adagio recorded here. All the notes of this piece can only be heard when it is played either by a machine or by two human organists. The Duo imbue its Italianate melody with a smiling warmth which is most affective.

After a little-known organ duet with a fugue from Gaebler which shows off the Main Organ's range and power, the Duo turn to the compact Choir Organ, and a Prelude and Fugue from Albrechtsberger (Beethoven's teacher), more open and light-footed on the Baroque disposition with its gurgling flutes - utterly charming.

JC Bach's Sonate in F major, Op 18.6 is also played on the Choir Organ. Especially in the Rondo, Jaana and Irina make it the sheer essence of JCB's foot-tapping Galante. The first movement of Mozart's Sinfonia no 40, KV 550 sounds remarkable on the Choir Organ too, in an arrangement by Maurizio Machella. Rather than the nervy approach to the main theme favoured by many conductors, the Duo base their rendering on the closeness of the theme to Cherubino's artful aria "Non so più" from Figaro, which adds an attractive element of humour to the movement.

Returning to the Main Organ, another of Macella's transcriptions is Sousa's Washington Post, which immediately drops us into a bustling fairground. Rossini's Overture to L'Italiana in Algeri has faultless comic timing, and the final piece on this album is a Prelude extract from Bizet's Carmen, fizzing mixtures outlining the fast introduction, followed by the immortal Toreador's Song. This piece shows a terrific dynamic and tonal range, from the highest of mixtures down to the lowest pedal basses, and, like Finlandia, is a tour de force of energy and natural brio.

The Duo write succinct but informative notes in Alba's booklet, which also has B/W photographs of the church and organs. Koivusalo's multichannel recording is, as always, exemplary; the organ speaking out into Kallio Church's wonderful warm and smooth ambience. It also features room-shaking deep bass, inviting one to turn up the volume and never mind the neighbours. While the three-dimensional sonic image of the organ clearly shows the exact locations of the speaking pipes across the stage, the Stereo track, using a separate mic array, is indeed beautiful, but lacks the final frisson of "being there" in the large building.

This is an outstanding disc in every way: the programme is enticing, the musicianship of Janna Jokimies and Irina Lampén demonstrates their phenomenal rapport and the recording is totally devoted to their music-making. More please! 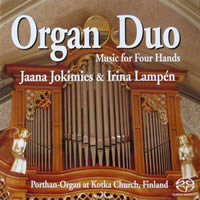