The Cleveland Orchestra establishes its own hi-res label. This is good! http://nytimes.com/2020/10/09/arts/music/cleveland-orchestra-classical-music.html

And the other way around exists as well: Mendelssohn: The Young Genius - Van Swieten Society No SACD logo on the cover though it clearly is. Not only my player says so: DSD MC, ...

Only a minor point, Adrian, but streaming services do indeed stream in Hires (but not so far in surround). One of the most successful, based in your own country I think, ...

So, how does one know if a recording has been remastered? I actually have 3 copies of this performance, 2 on vinyl and the RCA SACD. I believe they all have different masters.

Are they going to be on SACD? That would be very exciting as Analog Productions have been out of the SACD market for quite a while; in fact, one batch of Living Stereo ... 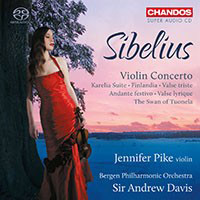 
Jean Sibelius is perhaps best known for his seven great symphonies but there is also a large body of music for the concert hall, the theatre, and the salon, some of which is explored in this release. The Violin Concerto in D minor, Sibelius’s only full-length concerto, marries brilliantly idiomatic writing for the solo instrument with the seriousness characteristic of the symphonies. Intensely virtuosic, it is both a dramatic and a deeply romantic work. The Swan of Tuonela comes from the suite of four Lemminkäinen Legends, inspired by traditional Finnish myths. In it the majestic motion of the swan is evoked by the arching phrases of the cor anglais. Also featured are two well-known shorter works indelibly linked with Finnish identity. Finlandia became a national emblem of the Finnish struggle for independence from Russia while Andante festivo is a staple of Finnish public occasions. The Karelia Suite is another patriotic work, the rough-hewn character of its three movements intended to evoke a folk-like authenticity.

Sir Andrew Davis continues his relationship with the Bergen Philharmonic Orchestra in this their third recording together on Chandos. They are joined in the Violin Concerto by Jennifer Pike, one of the brightest young violinists performing today.

An unashamedly populist Sibelius programme such as is found here represents something of a rarity for Chandos whose recordings more often than not plough the musical furrows of lesser known composers. Nevertheless, with performances as well played and recorded as here, this SACD will be welcomed by many listeners.

The main work on the disc is the Violin Concerto performed in its usual revised version of 1905 by Jennifer Pike. As the youngest ever winner of the BBC Young Musician of the year back in 2002 she was quickly recognized as a major talent and though now only 24, is considered to be one of the UK's foremost young violinists. From the concerto's hushed opening bars it is apparent that this is set to be an absolutely compelling performance from Pike. Though her playing is initially marked by a sense of introspection, there is no lack of dynamism and muscular attack – especially in her thrilling account of the fiery finale. In the marvellous slow movement she conjures a stream of impassioned lyricism aided by the rich sound of her Matteo Goffriller violin of 1708 – an instrument that is currently available to her from the Stradivari Trust. Support from Andrew Davis and the Bergen players is everything that one could wish for. Even amongst the many fine recordings of this concerto Jennifer Pike's performance is one of considerable distinction and worth the price of this disc alone.

The remainder of the programme is a varied selection of well-known Sibelius favourites that join the countless versions of these pieces already available on CD. However, the 'Valse lyrique' is new to SACD. This is a piece that represents Sibelius in his lightest vein and is played with a winning insouciance by the Bergen players. Though Davis's performance of the first two movements of the 'Karelia Suite' strike me as being a tad lethargic – 'Finlandia', 'Valse triste', 'The Swan of Tuonela' and the 'Andante festivo' are unlikely to disappoint.

The Chandos sound quality is excellent, as usual from this source. In the concerto it is pleasing to report that the the soloist is ideally balanced rather than spotlit as on so many recordings of this work, making it possible to appreciate fully the fine wind solos from the players of the Bergen Philharmonic Orchestra in a realistic concert hall perspective..

This attractive collection should make many friends and can be confidently recommended.