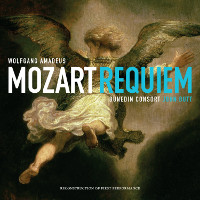 
In keeping with several other Dunedin projects, this provides the opportunity to re-imagine what this work may have sounded like at its very first performance. To this end, the recording will be the first not only to use this new edition, but also to present the work using forces close in style and scale to those at the first performances.

The Dunedin Consort presents the premiere recording of Mozart scholar David Black's new 2013 edition of Süssmayr's completion of Mozart's Requiem. In keeping with several other Dunedin projects, this provides the opportunity to re-imagine what this work may have sounded like at its very first performance.To this end, the recording will be the first not only to use this new edition, but also to present the work using forces close in style and scale to those at the first performances. One striking element of these performances is the fact that the soloists are also the leaders of the choir, thus giving a greater consistency to the relationship between the solo numbers and the choruses.
Works (1)

It is well-known that in 1791 Mozart was commissioned to compose a Requiem for the deceased wife of Count Franz von Walsegg (the Count had a habit of obtaining pieces from well-known composers and had them performed under his own name in his domicile). Mozart was fully occupied at the time with opera, so only only began work on the Requiem towards the end of the year. Fatal illness overtook Mozart after he had written around two-thirds of the work's musical material. He died after composing eight bars of the Requiem's Lacrimosa.

Mozart's widow Constanza needed to have the fee for the Requiem, and sought help from several musical associates of her husband. She finally chose Franz Xaver Süssmayr, who had worked with Mozart as a copyist and was well-versed in his idiom, to complete the Requiem within 100 days. In the Nineteenth Century, musicologists debated about how much the completion of the Requiem was attributable to Süssmayr (or even to other shadowy figures). However, the listening public was more than happy to regard the realisation of the Requiem in d minor as the work of Süssmayr. A detailed account of the Requiem's gestation and completion can be found as an Audio CD supplied with Cleobury's recent SA-CD version of the work with the King's College Choir (Mozart: Requiem - Cleobury).

Around the turn of the Twentieth Century, some musical scholars began to wonder if contemporary composers could do a better job than Süssmayr (an example of hubris?). The aforementioned Cleobury disc contains not only a performance of the Süssmayr completion with a number of other "realisations" by Richard F Maunder, Robert D. Levin, Duncan Druce and Michael Finnisay. The listening public, however, retained their affinities with Süssmayr's version as THE Mozart Requiem.

Along comes John Butt OBE FBA FRSE with a splendid project to reconstruct the first full performance of the Requiem, based on evidence from his own research and that of David Black, who has produced a new edition of the Süssmayr version which shows very clearly the areas completed by Mozart and the precise extent of Süssmayr’s additions. It also presents several details previously obscured by later ‘improvements’, particularly those added in the first published edition by Breitkopf & Härtel in 1800 (which does not mention Süssmayr), As an expert of choral music in Classical Vienna, Black has also collaborated with Butt in tracing the earliest performances of the Requiem and the forces which performed them.

It is generally supposed that Franz Count von Walsegg, presenting a Mass in memory of his wife at a church in Wiener Neustadt on 14 December 1793, gave the first full performance. However, there were two previous performances. The first was at a Requiem Mass held for Mozart in St Michael’s Church on 10 December 1791 five days after his death. It seems to have been arranged by the impresario, librettist and actor, Emanuel Schikaneder, who was a partner with Mozart on producing 'Die Zauberflöte' Evidence suggested to Butt that only Mozart's "finished" sections were performed (Introit and Kyrie), with a chorus of 8 (including soloists, who also joined in with the ripienists) and single wind and single lower strings with doubled violins. Butt adds an appendix of such accoutred performances by the Dunedin Consort (with period instruments) in the last two tracks of this disc.

The second performance was the première of the whole Mozart-Süssmayr version, presented in Vienna on 2 January 1793, just over a year after the composer’s death. This was at a well-documented benefit concert for Mozart’s widow, Constanze, which his great friend and patron, Baron Gottfried van Swieten, promoted at a hall connected to a prestigious restaurant. Mozart’s Handel performances
of just a few years previously offer a fairly consistent picture of the type and size of the performing group likely involved and adopted here by Butt. Four singers to each part are included and led by the respective soloists. Strings were 6,5,4,3,2 with 2 each of Corno di Basseto, Bassoon and Trumpet, 3 Trombones, Timpani and a Fortepiano as there was no organ in the hall. The fortepiano continuo is reticent in Linn's sound-mixes but it clearly can be heard in the last bar of 'Rex tremendae'.

Butt's relatively small chorus very clearly lets the orchestral be heard in more detail than in many other performances, and the presence of the soloists singing both ripieno and solo parts gives an intriguing texture as the solo voices lead throughout, giving a sense of urgency. Butt's fine essay in the disc's booklet also discusses the 'Misericordias Domini, K. 222', written by Mozart in 1791 shortly beyond his death, which demonstrates the many styles and influences which the composer masterfully combined to give his special musical character to his sacred music. A fine performance of K. 222 is also added as an appendix track on the disc, where you may also marvel at how closely Mozart's second subject melody came to being that of Beethoven's "Ode to Joy"!

It is extremely difficult to bring a fresh approach to such established war-horses as Mozart's Requiem, despite the musicalogical errors of some Süssmayr additions. However, Butt and his Dunedin Consort have done this before with their Baroque revivals, and their superb musicianship once more produces a thrilling performance of the Mozart-Süssmayr’s version in its pristine state. The result is a powerful affirmation of Mozart's dramatic, even heroic, consolatory approach to Death, which surely needs no insertions or manipulations by modern composers to make its profound effect.

Linn recorded the Dunedin Consort in the Greyfriar's Church in Edinburgh, a venue often used in the Edinburgh Festival and whose acoustic is very familiar to me. The booklet has several coloured photographs showing the disposition of chorus (soloists positioned within the whole choral group), instruments and microphones) which are vividly recreated sonically, especially in multichannel. The resonance of Greyfriars Kirk is beautifully caught, even to the characteristically somewhat hollow sound at the end of dying sound when the musicians stop.

There is no doubt that this issue is thought-provoking in its scholarship, exciting in its spontaneous and assured musicianship and another great success for Butt and the Dunedin Consort. This unique account of Mozart's Requiem is in the top echelon of recordings to my ears, and I urge Mozart-lovers to acquire it forthwith. The affection of generations of listeners for the Mozart-Süssmayr Requiem is hereby vindicated.