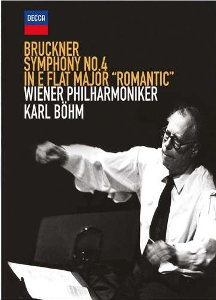 The appearance of Böhm's famous 1973 version of Bruckner 4 on an expensive stereo only hybrid from Japan raises the question of whether it's worth getting, compared to the 24/96 digitisation on the Decca legends reissue of 1999. Even the original CD release was of 'demonstration' quality in its day.
For a brief recap on editions, there are three main ones. First version of 1874, as heard on Inbal (Teldec); First definitive edition of 1878/1880, the commonest nowadays; Revised version of 1886. The butchered Schalk edition has unfortunately gained currency as it was the basis of the Eulenberg pocket score etc; this was Furtwängler's performing edition. The 1878/1880 was edited by Haas, however it was reedited and published by Nowak in 1953. The Haas has a variant where oboe replaces flute in the trio; Klemperer used this. Böhm uses Nowak. Having no access to the score, Nowak's main audible difference to Haas appears to be the excision of the melodramatic cymbal crash at approx 2:30 into the finale.

Celibidache ( EMI 7243 556690 ) has really an extraordinarily spacious and profound 'adagio-finale', lauded by Robert Simpson in his monograph on Bruckner. Apropos of Celibidache, he writes in 'The Essence of Bruckner', page 106 …"the demonstration of naturally flexible yet monumentally controlled, related tempi which preserve the vast…momentum." This is pertinent to Böhm's rendition, for his spacious tempi could have readily turned into Kapellmeisterish stodge. However, his experience of operatic pacing over the largest harmonic and structural spans in Strauss and Wagner surely was an ingredient in capturing one of the greatest Bruckner performances. Into this architecture Böhm paid full attention to the pointing of the ländler-like details which make this symphony as witty and charming as it is stentorian and majestic. Obviously, it also helped that he was able to energise the Vienna Philharmonic into demonic playing that would be matched in Kleiber's Beethoven 5 with them the next year.

The engineers in the Sofiensaal made one of the greatest ever symphonic recordings, far superior to the sound the DG engineers were able to offer Kleiber's Beethoven with the same orchestra. Its spaciousness allows the magical tremolandi and horn calls to blend into the hall acoustic. There is no need to delve in detail on this famous performance, but a few salient points. Karajan's sound was more homogenised, both in his balances and recording, which suited his seamless legato. Böhm was less interested in beauty via homogeneity. Compared to all above listed versions, he allows the entire gamut of temperaments in the brass writing to emerge. The recording captures his multiple variants of string tremolandi at the lowest dynamic levels.

These varieties of string textures are harder to hear in the Karajan and Barenboim versions. I attended two of the Barenboim Berlin Phil concerts from which his Teldec recording was culled. At least in this work he was unable to elicit the distinctions between ominous, expectant and relaxed pianissimo that Böhm and Wand were able to achieve. From these dynamic subtleties, to the horns from their merest glimmer over the strings to their full cry, all was captured by the 1973 Decca engineers in the Sofiensaal. Interestingly, like Kleiber's Beethoven 5, it is the slow movement which is a notch lower in distinction, at least prior to the development of its climax. In large measure this is due to the relative absence of the passages of shimmering tremolo for strings which Böhm utilised with such shrewdness in the opening movement. Celibidache and Barenboim are here even slower to the point of sluggishness. Furtwängler the most gauntly deliberate of all at around 18 minutes, but he was able to sustain this tempo with unflagging concentration. Nevertheless, the overriding impression is a Brucknerian reworking of Siegfried's funeral march.


BMG Japan have released a SACD box containing Wand's Bruckner 4, 5, 7, 8 and 9 in live performances with the Berlin Philharmonic ( plus a DVD 'My Life, My Music' in German with Japanese subtitles). These appear to be the same ones released internationally on CD shortly after the concerts they were spliced from. Although the Böhm is in stereo, these discs with the exception of the Fifth have an additional multichannel remix. The box is a sumptuous and expensive production. The CD layer of these discs have multiple index points keyed to the rehearsal letters in the score. According to the booklet, 'For the entire process of remixing and remastering, Esoteric G-0s Rubidium master clock… Esoteric D-01A covertor and TASCAM DA-98HR Digital Recorder were used'. These Esoteric components form part of their reference SACD replay system : each monophonic DAC and master clock retails at over US$ 10000 for each item.

Having the Wand Bruckner 9 on its original CD release, I compared it to the CD layer of the hybrid SACD. This was definitely no rehash of the original CD layer. The new CD layer had more detail, and sounded more in-focus, although the original CD was by no means lacking. My impression was that the BMG engineers had been able to capture the BPO sound more faithfully than the DGG engineers had for Karajan or Abbado. Presumably, this remastering improvement has also extended to the Wand Fourth. There is no detail on the nature of the original digital tapes. However, it is almost certainly PCM digital, despite the relative lack of 'digititis'.

Artistically, this Fourth was celebrated on its release. It has much in common with the Böhm. Böhm is both more expansive and 'atmospheric' in the first movement, and more energetic in the finale, where Wand elects for majesty over momentum. Apart from the concluding measures of the finale, where Böhm's brass resounds over the rest of the orchestra more tellingly than any performance either in concert or on disc that I have heard, Wand's finale sounds closer to the sound world of 'Götterdämmerung' or Act 3 of 'Siegfried'. This is mainly due to the heavier brass and plummier BPO string tone.
Both Böhm and Wand have performances which are hard to describe, as they both sound naturally 'right'. Wand has some tempo slowings and abrupt changes in dynamics in the outer movements. For instance, in the first movement there is a sudden string hush at about 13'35 to prepare for the grand peroration of the main theme by full orchestra. These moments interestingly don't match Furtwängler's more extreme signposts in his 29/10/51 performance on the Tahra label.
The sound accorded to Wand is splendid, but it is close, presumably to reduce audience noise. Hence the opening of the first movement has great texture in the string tremolandi, making CD versions sound vague. However, the Decca engineers for Böhm had a more expansive and distant perspectve, making the strings magically appear in a shimmer from the hall acoustic. This sounds wonderful on the SACD layer, and is surely more faithful to the effect the composer intended. Having these two great performances on SACD is a luxury, albeit an expensive one.

ADDITIONAL COMMENT, 2015 :
This release matches the Japanese SACD releases in terms of content, without offering any extras to take advantage of Blu Ray audio's potential extra playing time. At the time of writing I have been very impressed by Decca's release for the Sibelius centenary of Lorin Maazel's 1960s VPO Sibelius symphony cycle, complete on one blu ray audio with 'Tapiola' and the 'Karelia suite'. There's little doubt that the magnificent sound Decca achieved for this Bruckner in the early 1970s is superior to even what we hear in these 1960's Sibelius symphonies.
However, Böhm also recorded Bruckner 3 with the VPO for Decca, which would've made an ideal coupling. [ Even more ridiculous are the separate blu ray audio releases of Mravinsky's stereo Tchaikovsky late symphonies. When DGG released Karajan's 1962 Beethoven symphonies cycle complete on one blu ray audio, it's obvious that DGG could have released both the Mravinsky/Sanderling Tchaikovsky 4-6 mono set from the late 1950s, and the stereo remakes complete on one disc.] The blu ray audio does not appear to offer a new remastering. The blu ray audio sounds basically the same as the hybrid SACD when played on my Oppo BDP-105 [ the hybrid SACD sounded slightly softer or duller ]. However, I marginally preferred the sound of the single layer SACD compared to the blu ray audio even when the video processing was disengaged on the Oppo. 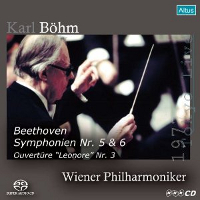 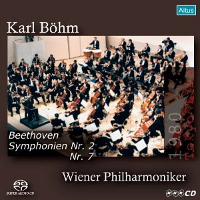