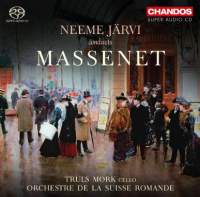 
Jules Massenet has long been associated primarily with opera, while his orchestral works have gone unappreciated. This collection of overtures, ballet music, and concert pieces, each with its own unique orchestral colour, showcases Massenet’s orchestral writing at its finest. The Orchestre de la Suisse Romande is conducted by its Music and Artistic Director, Neeme Järvi.

From the opening diminished seventh chord of the Ouverture de ‘Phèdre’ it is clear that we are in a world of high drama. Commissioned in 1874 for performance in Paris, it is based on Racine’s play. Written in the same year, but in complete contrast, is the Scènes pittoresques, full of a grace and elegance that often recall Tchaikovsky. The ‘Suite de ballet’ from Le Cid evokes yet another soundworld, one of exotic colours and exuberant celebration, its seven movements featuring dance music from different regions of Spain.

Also featured on this download are a number of works involving a solo cello, performed here by Truls Mørk, one of the pre-eminent cellists of our time. He shines a light on Massenet’s little-known Fantaisie for cello and orchestra, a fine piece rarely heard on disc or in the concert hall.

Another gem in the cannon from Jarvi (snr) and Chandos.

One of my first ever recordings (back on a not-very-good LP record player) that I owned was of (my now local band) the CBSO under Louis Fremaux performing Massenet's Le Cid, Scenes Pittoresque & The Last Sleep of the Virgin. From a sheer technical perspective, the veteran of my listening habits is being retired for the dynamic range here is far expanded together with much more detail, in part helped by not being recorded in the Great Hall of my alma mater, the University of Birmingham; which lives up to its name in capacity of volume only. Musically neither does Jarvi lack anything; indeed his account of Le Cid is one that "just" enjoys the ear-tickling melodies and nothing more.

Truls Mork then joins the orchestra as soloist for The Last Sleep and is met with a dignified, eloquent response from the Orchestre de la Suisse Romande; this disc is not just about surface "froth". The Overture to "Le Roi de Lahore" brings us back into the the world of fizzing oper(ett)a with some considerable elan from Jarvi's players - very infectious playing, even if not as memorable melodically as other works on this disc.

Truls Mork's main contribution on this fine disc is to Massenet's concerto in all but name, the Fantasie which is tracked by Chandos into three sections (all flow directly into the next) that largely follows the structure of the score. Unlike many concertos of the period, there are extensive passages in the opening "movement" accompanied only by wind, solo strings and timpani - a unique and charming effect. The orchestra sound as convinced as Mork as to the merits of this piece; the notes assert that it is a mystery why this piece is not heard more often & in this performance, it is a sentiment with which it is easy to agree.

The introduction of the overture to "Phedre" that follows is easily the darkest and most melancholy music on the disc and helps give a much more rounded view to the output that is normally given by most orchestral collections of Massenet's output. The remainder of the piece never fully manages to escape its troubled opening in mood; Jarvi's pacing and the orchestral playing is never less than exciting. Mork then returns to make his last contribution to the disc (but not his last to the compilation) in the extract from "Les Erinnyes". Many will immediately spot that the opening is reminiscent of the Meditation from "Thais": this is available as a free download with Mork playing the solo part (his last contribution). As in The Last Sleep, the eloquence from Mork and the orchestra is most effective and deceptively "simple" in approach but their subito pianos are made to feel a natural consequence of the preceding phrases.

The rather riotous outburst that heralds the opening to the "Don Cesar" extract should ideally have not followed so soon from Mork's final, dying note but the Entr'acte is a delicious bon-bon in which all are clearly enjoying themselves, as does this listener. To complete the physical disc, Scenes pittoresques is presented in a similarly delightful way as Le Cid was at the beginning of this potted 81'30 (not including the Meditation) journey through Massenet's orchestral works. Once again, there is every reason to retire many elder recordings for many felicities of scoring and playing are heard on this SACD in a way that other lo-res media just cannot match.

Chandos' recording is rich, detailed and reverberant without ever becoming clouded and enjoys a wonderfully large dynamic range which Jarvi & the Orchestra de la Suisse Romande exploit to the advantage of the music.

This generously filled (81.30) SACD collection of Massenet orchestral music is set to be my disc of the year. In terms of recorded sound, performance and, most importantly, sheer enjoyment it ticks all the right boxes.

The program gets off to an electrifying start with the well-known ballet music from Massenet's opera 'Le Cid'. This seven-movement suite of Spanish inspired dances gives the players of the fine Orchestre de la Suisse Romande wonderful opportunities to display both their individual and collective prowess and Järvi's performance could hardly be faulted. Only in the fast section of 'Madrilène' (tr.6) might the conductor's adoption of slightly exaggerated pauses between the staccato chords jar on repeated hearing.

The presence of that fine cellist Truls Mørk is welcome, though hardly necessary, in ' La Dernier Sommeil de la Vierge', a favourite 'lollipop' of Sir Thomas Beecham, or the 'Scène religieuse', a tranquil piece taken from the incidental music Massenet provided for Leconte de Lisle's play 'Les Érinnyes'. But his sympathetic performance of the composer's little known 'Fantasie' for cello and orchestra shows what a gem this rarely performed, yet richly melodic, mini-concerto is in the hands of a virtuoso soloist.

The two overtures included on this disc are a well contrasted pair. That to Massenet's opera 'Le Roi de Lahore' is for the most part grand and brassily rousing, but in its six minute span manages to include a fugal section and one of those soaring melodies that are trade mark of this composer's many operas. In contrast the 'Overture de Phèdre' has no operatic basis. It is a purely orchestral work taken from Greek mythology and inspired by 'Hippolytus' - the drama of Euripedes. The seriousness of the music reflects the tragedy of the subject and Järvi's committed and sensitive performance is realised through thrilling playing from all sections of the Orchestre de la Suisse Romande.

The other suite on the disc is 'Scènes pittoresques' the fourth and perhaps most well-known of Massenet's seven orchestral suites. This deftly orchestrated work opens with a delightful march followed by a gossamer light 'Air de Ballet' using music taken from Massenet's early opera 'Don César de Bazan'. A solemn 'Angelus' notable for the sound of bells being brilliantly represented by horns leads to final exuberant 'Fête bohême' whose opening has more than a hint of a Tchaikovsky ballet. Järvi paces this, and all the works on this SACD, perfectly with no sign of undue haste that can mar some of his recordings.

Just one minor niggle. The excellent booklet notes from Roger Nichols discuss each work in chronological order of composition rather than the order in which they are performed on the disc – meaning that one has to flick back and forth between the pages to refer to the relevant note when playing the disc through.

I have commented in previous reviews on the wonderfully opulent sound quality Chandos are obtaining from their recordings made in the Victoria Hall, Geneva and this one is no exception. The combination of clarity and ambient warmth is exceptional. Timpani and percussion are crisp and well defined while every entry of the bass drum can be felt as well as heard.

An outstanding release in every way.