Frank Sinatra with Count Basie and the Orchestra: Sinatra at the Sands | breydon_music - Yesterday 05:01 am 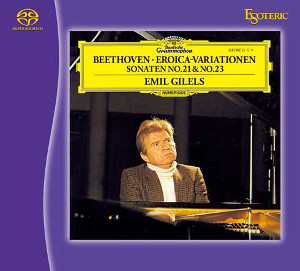 Performance: Sonics:
Note : See correction appended to the bottom of this review!
At last, two of the most vaunted Beethoven sonata performances in the catalogue make it to SACD!

Emil Gilels and Sviatoslav Richter were two of the earliest musicians allowed by the Soviet authorities to tour the West, from about the mid-1950s. The Soviets restricted their appearances in Western recording studios. Though by the time of their deaths both had amassed a large and redoubtable studio-recorded legacy, an artist such as Vladimir Ashkenazy after his defection made records at a pace for which metaphors of rabbit fecundity aren't entirely misplaced. Whereas Arrau, Kempff, Brendel and Barenboim recorded all the Beethoven sonatas twice or more, Gilels was accorded this privilege only for the concertos. By the time of his death in 1985 aged 68, DGG [ Deutsche Grammophon, now part of the Universal Music group ] had managed to record Gilels in 27 of the 32 piano sonatas assigned opus numbers, along with two of the very early 'Electoral' sonatas. Though he'd recorded some minor sets of variations for EMI, the Diabelli became another missed opportunity. Following performances during concert tours, the Waldstein along with Op101 formed his first LP in the abortive cycle, with the Appassionata following the next year in 1973, coupled with Op 10/2.

Nine of the piano sonatas were recorded in superb analogue sound during the 1970s, split between Finland and Berlin. The remainder, along with the Eroica variations, were set down in early digital sound from 1980 onwards. One surprise is that the venue for these digital recordings was Berlin's Jesus-Christus-Kirche, the church where both DGG and EMI recorded the Berlin Philharmonic so atmospherically during the 1960s and 70s.

The performance of the Eroica variations is magnificent in terms of Gilels' virtuosity, his ability to structure each overlapping phrase, while giving the impression of the work as a totality at any given point. The balance between the virtuosity of the bravura passages and the spiritual inwardness of the more ruminative variations affords a dynamic tension to the work as a whole. 'Promethean,' or divine fire, is how Beethoven named this theme when he incorporated it into a ballet. It's an apt summary for the blazing musical conception and technical artistry exhibited here.

These variations, set down in 1980, were one of DGG's earliest digital recordings. Doubtless Esoteric decided to place this first on their remastered release for the stupendous clarity and impact of the opening chord in this pianist's massive hands. Compared to the bloom and generous acoustical space the DGG engineers accorded orchestras in the analogue era at this venue, these solo piano tapings disappoint. It sounds as if one was sitting on the piano stool turning pages, or even stooped with one's head somewhere between the sheet music and the piano lid. Clearly the engineers hadn't had the time to adapt to the idiosyncrasies of the new recording medium, where clarity is a double-edged sword. The golden beauty of the pianist's tone turns hard and brassy during fortissimos. I bought the original CD release and the somewhat improved remastering when DGG collected all the solo Beethoven together a few years after the pianist's death. The Esoteric remastering improves on the remastered CD by about the same small increment as that did on the borderline harsh original CD issue. In particular, the glare in the body of the treble notes is mitigated, so the recording while never exactly pleasant is less of a travesty of a keyboard Prometheus famed for his burnished tone. Esoteric have not unearthed hitherto unknown microphone feeds to present a less fly-on-the-head-of-the-page-turner's vantage.

The change to the bloom of the piano in the Waldstein is dramatic. I bought the original CD release of this, whereas for the Appassionata I also had an indifferent late 1970s LP. I'd thought that for this first Gilels Beethoven sonata recording the engineers had somewhat erred in the other direction, making it a shade too distant, with a shallow body for the tone in the middle movement. Gilels treats this adagio molto as an introduction to the barnstorming finale, which is what the composer directs by his direction 'Introduzione.' He doesn't seek to milk its depths as much as Schnabel, Arrau and perhaps Solomon do, but then again hardly anyone else does so either. However, the lead up to the opening bars of the finale, with the resolution of the harmonic tension and the reestablishment of an obvious rhythmic pulse are quite magical. Interestingly, I thought his playing of this middle movement was restrained and cool to the verge of remoteness when I heard the original CD release. The fuller, deeper sound in this SACD remastering renders it more compellingly mysterious, due to the greater audibility of the overtones in the piano chords.

The tone colours which Gilels elicits for the Waldstein particularly during the more introspective passages, are incredible, tribute to his rich velvety touch. The French nickname for this piece, 'Aurora,' was never more apt than under his fingers! For both this and the Appassionata at times one doesn't feel he is playing as quickly as some other pianists during the outer movements, until one checks timings. [ However, it has been brought to my attention that Wilhelm Kempff in his mid-1960s stereo version finishes Op 57's first movement in 9'50 versus Gilels in 11'02. Kempff's rendition, at least to this listener, amply demonstrates that velocity is not always the helpmate of intensity or to a sense of menace.] Gilels' technique is so monumental that his fingers just appear to have more time than those of lesser mortals. It brings up the intriguing aesthetic question of whether sometimes one can be too technically competent to suggest the abandon and emotional frenzy in a work of art, where hinting one's technique is on the edge serves as proxy for music close to the edge. There is also a video from DGG of Gilels performing the Waldstein in concert, filmed in 1971, for those who want to see more thrills. One has to tolerate its perverse editorial decisions, particularly the camera cutting away from the astonishing octave glissandi in the finale.

The Esoteric remastering at least in my system has wrought the most gains for the Waldstein, but has also improved the Appassionata, particularly in the definition of the bass notes at lower dynamic levels. The peculiar thinness of tone for some sections in the original Waldstein CD release has cleared like mist under strong sunlight. The tonal richness, particularly the overtones shimmering around the trailing edge of chords, are lovely. In this matter the recording is far superior to that accorded Gilels in those 1980 digital recordings, particularly Op 2/3 and Op 28. [ The piano tone for the sonatas here is also richer than I can hear for Pollini in the early 1970s Stravinsky/Prokofiev disc recently remastered by Esoteric for SACD.]

Gilels rendition of the Appassionata is truly epic. The power and limpidity of touch he demonstrated in the Waldstein is present here in all its refulgent glory. I have not heard as much pathos in the interpretatively elusive Andante from anyone else except Schnabel, but Schnabel's technical thrills and depths are accompanied with almost as many spills and smudges.
The combination of Gilels' transcendental technique, the ideally placed acoustic for the piano, plus the analogue tape under its new remastering, fully realise this musician's artistic vision. If a piano piece under the hands of an unsympathetic interpreter examined under a close and bright recording gives the impression of a metal ingot pounded flat by a panelbeater, this is the polar opposite!
The Appassionata here comes across as quite four dimensional. One doesn't just hear this in stereo. So compelling is the performance and execution that at least this listener gains the uncanny impression one can see the sound and track the sinews of each phrase, observe in real time how it fits into a living whole.

Esoteric have also included the bonus of an appreciation of Gilels' Beethoven, in English, by Klaus Bennert. This appeared in the original CD box set.

CORRECTION : A MEMBER OF THIS SITE HAS NOTED AN EDITING FLAW IN THE SACD :
The final four bars in track 1 are omitted in the Eroica Variations, prior to track 2, the formal statement of the theme. I have checked with the performance on the CD in the CD box set, the same one from which Esoteric reprinted the English notes. These bars are present in the recording. The booklet track timings for the Eroica in the CD transfer are : Introduzione 3'01, Tema 0'42.
SACD timings Introduzione 2'58, Tema 0'42

Good news for all who don't want to pay moon prices for this esoteric sacd: Universal Japan is going to release all analogue-taped sonatas of Gilels DG cycle on two SHM-SACDs in April. Newly remastered - as usual - by EBS.