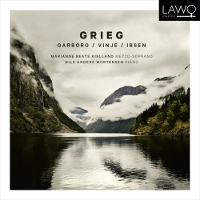 
Grieg's songs based on texts by Garborg, Ibsen, and Vinje have never before been brought together on one recording. Now, critically acclaimed and Grammy®-nominated mezzo-soprano Marianne Beate Kielland and pianist Nils Mortensen have recorded these songs, and with their authentic interpretations they make an important contribution to the rich variety of Grieg releases.

For those outside Scandinavia, Norwegian classical music generally means Edvard Grieg, known to the listening public mainly thorough his Piano Concerto and two orchestral suites from Ibsen's Peer Gynt. However, many musicians, professionals or amateurs, will have performed some of his smaller works. But, looking at his total output, we could regard Grieg as a composer of songs.

Grieg in fact wrote 181 songs, of which 34 remain incomplete or in sketch form. There are also 58 works for mixed or male voice choir and for solo voice with choir. Excepting the folk song arrangements, Grieg composed more vocal music than all his piano and chamber music put together. His development both as an artist and a human being is most closely reflected in his vocal music, specifically in his songs. The three song cycles performed on this disc illustrate that convincingly.

Op. 25's Six Ibsen Songs (1876), Op. 33 Twelve Vinje Songs (1880) and Op. 67 'Haugtussa', eight songs from Garborg (1895) were set at significant periods in his life when the composer was inspired by the foremost of Norway's poets. In her booklet notes, mezzo-soprano Marianne Beate Kielland claims that this is the first time that these seminal song cycles have come together on disc, partly because a spurious tradition has that the Vinje songs should be sung by a baritone because some of the songs indicate a male protagonist. Grieg, however, usually gives no indications as to the type of voice for his songs. We are, after all, in the era of hearing Schubert's 'Die Wintereiser' sung by mezzos or female altos!

Why was Grieg so attracted to Art Songs? The answer rests with his Danish wife, Nina. She was a professional soprano, assigned by Grieg to première many of his songs. Like him, she was also a knowledgeable and sensitive explorer in Literature, about which they seemed to share many opinions. She was therefore not only able to understand and perform his songs, but she added support in the choice of his texts for composition.

The three song cycles on this disc have several features in common: the Nationalist tendencies of writers and composer, their various internal conflicts between Romanticism and Modernism and their favouring of an early form of Norwegian, Landsmål (national language), developed after the Danish withdrawal in 1814 and based on colloquial Norwegian and dialects of Western Norway.This language was musical in itself and therefore attracted Grieg, at a time in which another "national language", Riksmåll, mainly used in writing, was competing for attention.

On this disc, the three cycles are performed in reverse order of composition - possibly a matter of "latest and greatest first". I found it more informative, however, to listen to the cycles in order of writing, from the affectionate reminiscences of country life by Ibsen, to the uncertainties of Vinje's view of Nature and his views of folk life which mostly seem to dwell on Death. These peak in Grieg's mastery of Arne Garborg's 'Haugtussa' by shrewd distillation of its 71 poems (a novel in verse) to a final collection of 6 songs.

Marianne Beate Kielland tells us in the booklet that she and her regular accompanist, Nils Anders Mortensen, they have studied the scores anew, and take particular notice of Grieg's careful dynamic markings and tempo instructions. This effort of avoiding "overthinking" by some other performers lightens the textures and avoids the invasion of a salon sentiment form of Romanticism.

Kielland shows great empathy with the songs (as does Mortensen), providing subtly-expressed and sensitive performances which cover a wide range of emotions and characters. An example of this scrupulous approach is that Kielland's gently lilting and wide-eyed 'Det Synge' from Haugtussa has restored the soft vocal trills which were removed by the publishers from the First Edition for fear of making the part too difficult for amateurs. Echoing the piano's trills with her restored shivers, Kielland adds a magical touch to other-world atmosphere which Grieg conjures up with his harmonies and sudden modulations.

Mortensen's piano part is given, in many songs, the task of description of poetic emotions and setting atmospheres, in those songs where Grieg gives the singer very simple but meaningful melodic lines. Together, pianist and mezzo produce readings of the three great song cycles which are equal with, and often surpass, existing recordings (RBCD) by Mariano Hirst, Monica Groop, Love Derwinger and Katrina Karnéus (who gives a performance of the first song in Haugtussa which is a minute longer than Kielland's).

Lawo's recording is rather unusual. The venue is Vågan Church (locals call it Lofoten Cathedral) on the island of Austvågøya, just off the west coast of Norway in Nordland. This is a large wooden building (not a traditional Stave Church but one of standard plan, and capable of holding 1200 people, mostly fishermen). Without a multichannel track, this large space hardly makes its presence known, except for a faint decay of sound at the end of songs. The result is a very intimate setting, with the voice in particular given great clarity which supports Marienne Kielland's very good articulation. To my ears, however, the piano is a touch dry and more closely observed, particularly in the treble, which is somewhat clattery and lacks its proper sweetness from developed overtones; in this large but low-reflection venue it might need the bloom which a multichannel track could have provide). Playing excerpts from the RBCD mentioned above, the elevating bloom on their recordings is quite noticeable, which I personally find more attractiive.

Lawo's usual cardboard enclosure is attractively presented, texts are in Norwegian and English for the booklet, poems and biographies.

Despite my slight reservations about the recording, which others might well not be bothered about, this is a unique recording in several ways, and offers many new insights from both poems and songs. And it re-emphasises how important and enjoyable Grieg's Art Songs are. Could we have some more by these artists, please?