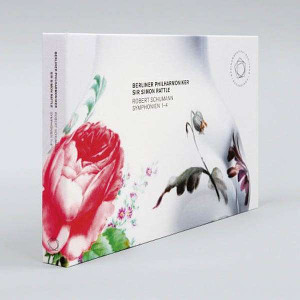 Schumann: Symphonies 1-4 (original version of No. 4)

The Schumann symphonies have accompanied the orchestra throughout 2013 – in Berlin and on tour in Europe and Asia. The Berlin Tagesspiegel wrote of a “defining moment”, while the Frankfurter Allgemeine Zeitung praised the “truly sensational quality”. Another special feature of this recording from the Philharmonie is the decision to use the early version of the Fourth Symphony from 1841, whose appeal for Simon Rattle lies in its extra “lightness, grace and beauty” compared to the established later version.

The linen-bound CD/Blu-ray edition includes the Schumann cycle in different formats. In addition to the traditional audio CDs, there is also a Blu-ray Disc which enables music lovers to listen to the recording in audiophile studio quality of 96kHz/24bit or as HD video. If you are looking for the recording in even higher resolution, there is an accompanying code which allows you to download a version online in up to 192kHz/24bit.

This first set from the Berliner's own label is self-recommending to fans of the orchestra, Sir Simon Rattle and anyone wanting a bigger orchestra than the two outstanding cycles from Thomas Dausgaard and Paavo Jarvi on SACD.

First a word of the content of the set. Three discs are held on a spindle separated by paper discs (one of which has a voucher for a 7 day trial of the superb Digital Concert Hall (DCH) of the Berliner Philharmoniker - sadly stereo only at present - and for a download of the audio content at 24/192 or 24/96 in stereo/5.0 FLAC/WAV formats), 2 of which are normal CDs and the third is a Blu-ray. On presenting to the player, the Blu-ray defaults to the studio audio-only recordings in stereo. A quick press of the red button changes the sound to MCH, yellow reverts to stereo and can be done at any point before or during playback. The main video content are extracts from concerts available on the DCH of the Schumann symphonies but there is an extended set of interviews with Sir Simon, orchestral members and producers of the recording which is definitely worth a watch to gain an insight into the corporate mentality of this great orchestra. Sadly no hints are dropped about future releases but I wouldn't be at all surprised if a Sibelius cycle was forthcoming from the same conductor. The notes are presented in English & German; they cover the symphonies and also outline the orchestra's relationship with the music in concert and the recording studio.

On to the music making! The "Spring" symphony opens proceedings (the symphonies are presented in order of composition) and one is struck that although the string forces here are somewhat larger than in Schumann: Symphonies 1 & 3 - Järvi and nearly double those of Schumann: Symphony No. 1 - Dausgaard (although far from the Berliner's full strength), the patina is far removed from the titanic sound conjured from the same podium by Karajan. Instead, it reflects Sir Simon's long standing interest in HIP. Tempo choices are remarkably similar to Jarvi's account but somewhat more relaxed than Dausgaard in the opening movement. Whereas many of his late-Classical, early-Romantic recordings have been widely held to have a large amount of intrusive "point making", such a trait is refreshingly absent here. If anything, the account of this symphony almost sounds too conservative in terms of phrasing from Sir Simon albeit graced by delightfully felicitous playing from the Berliner Philharmoniker; rarely does one hear something "anew". In the tutti passages, the added weight the greater numbers of strings bring will please many not completely won over by the chamber orchestra approach to this repertoire. Such large forces could easily have led to congestion in the Philharmonie but the high-resolution recording copes admirably well with reflecting the dexterity rarely heard by such a large band in this repertoire.

As part of the above interviews, Sir Simon eloquently articulates his belief that what we call the fourth symphony is best heard in its original incarnation (so much so that he refuses to perform the more commonly version); as such the fourth symphony is actually the second to have been completed and is reflected in the order of performance. Jarvi has only provided the revised version in his cycle, so comparisons rest solely with Dausgaard (Schumann: Symphonies 2 & 4 - Dausgaard). Rattle drives the music less than Dausgaard which, giving the musicians more time to get their fingers around the tricky passage work, allows any dissonances to be more keenly felt; this adds greatly to the unsettled feel of this symphony and is, perhaps, a case where less haste is more drama. The greater string weight of the Berliners certainly tells, especially as Sir Simon scrupulously observes Schumann's relative spare use of tremolo tutti passages. Compared to their account of the Spring symphony, the Berliners and Rattle sound more interested and alive here, perhaps reflecting their mutual curiosity of the (relatively) new. This performance stands out as being as though performed in a single take, it certainly has a very spontaneous air to the proceedings and is very involving.

Next up is the second symphony. As in the Spring symphony, Rattle's tempo choices are reasonably close to Jarvi's (Schumann: Symphony No. 2 - Järvi); both are somewhat more restrained than Dausgaard in all except the first movement. Perhaps this account sounds a little tame in the Scherzo (allegro vivace) & finale (allegro molto vivace) by comparison but some may feel that Dausgaard's approach is driven to a damaging degree. In the opening introduction, one cannot help but marvel at the tuning of the orchestra for it lends the music a golden halo that is rarely heard. The climax of this section is all-involving and many will feel that the superior number give the score some much needed heft that a chamber orchestra just can't quite manage no matter how skilfully the rest of the orchestra is balanced. Although this score is performed as "straight" as the Spring symphony, the approach works here where it previously sounded a little bland interpretatively. That we hear as much detail here as from smaller ensembles elsewhere is testament to the careful work of Sir Simon and the extraordinary dexterity & commitment from this great orchestra and the recording team. The Scherzo is perhaps the single most clear example where the use of divided violins reaps benefits of clarity and drama for the listener. Some rubato may rub some listeners up the wrong way if they particularly value a motoric drive for the Scherzo but the same style of rubato in the Trios sounds wholly convincing immediately and the sheer variety of string tone in the first Trio is a joy to the ear (from rich gloss through to a wonderful translucency). One benefit of taking most of the Scherzo more slowly is that the ensuing dash through the coda (at nearly, if not exactly, double speed) which quite takes the breath away! The slow movement is given a Romantic treatment, replete with tasteful glissandos, albeit in a manner that is tempered by HIP considerations so nothing is over-egged. Again, the string tone is deeper than even the best chamber orchestra can manage and adds to the intensity of the feeling evoked by the superb wind playing. The intensity of the playing & conducting is carried over into a wonderfully powerful account of the finale.

To round matters off, the Rhenish is performed well, if not quite starting at the same high voltage as the inner two symphonies. The first movement in Rattle's hands is more urgent than Jarvi allows but not pushed as relentlessly as Dausgaard; indeed there is some sensitive but unobtrusive rubato that prevents the movement becoming breathless. By contrast, the account of the Scherzo is more relaxed than either Dausgaard or Jarvi but with such careful articulation, it does not sound "flabby" or as though it is dragging its feet; similar considerations apply to the central Nicht schnell. The Feierlich movement is not as grandiose as some conductors of the Berliner Philharmoniker have chosen but neither is it so fleet-of-foot that it fails to evoke a large space. In this movement, the slow burn tension builds and builds relentlessly - especially when the dynamic drops suddenly - and suddenly makes sense of Rattle's decision to keep his emotional powder dry; this otherwise short movement foretells all manner of later music here and is remarkable. After such a triumphant effect in the fourth movement, the finale was always going to be hard to convince; some may want a larger pause for the preceding ideas to sink in but Rattle decides otherwise and launches into a tempo that is certainly not slow! There is a real air of jubilation in the playing that is quite majestic and sweeps all before it; the whole orchestra suddenly sounds as though Rattle has slightly loosened the HIP leash and the horns (amongst others) whoop for joy as the symphony triumphantly concludes.

As hinted at above, this is arguably the most believable aural picture to have ever emanated from the Philharmonie and is, unlike so many efforts from the past, something with which the ear enjoys rather than contends.

An auspicious start to what will hopefully prove to be a long and stimulating journey of recordings. 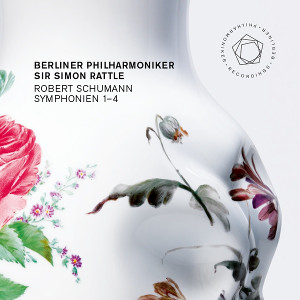