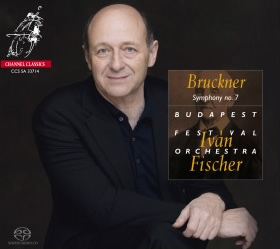 
Bruckner is the saint, the tzadik, the bodhisattva, the guru among composers. He is the purest and most capable of religious ecstasy. Everything is seen with the clearest vision, built to majestic proportions and felt with deepest emotions. The first melody commences as if it were the purest ever written. But soon the notes of a simple E major triad of divine simplicity give way to a chromatic search surrounding the dominant note ‘b” with a deeply felt human desire. The melody seems to find its calm cadence, but it leaps up again, three times, aiming to attain yet higher ecstasy. And this is only the start...

Whilst there is hardly a shortage of recommendable recordings of Bruckner's 7th Symphony to suit almost every taste – 28 available on SACD at my most recent count – canny collectors know that any new recording from Ivan Fischer and his peerless Budapest Festival Orchestra will be worth investigating and once again this proves to be the case. Nothing ever Fischer does is routine, and though this account of the 7th Symphony obviously will not satisfy all listeners, no Bruckner aficionado could fail to find the insights he brings to this work both imaginative and stimulating.

Though, as far as I could ascertain, the edition used is not stated in the liner notes, it appears to be the 1954 Nowak – the one that retains the triangle and cymbal clash in the slow movement. A glance at the timing for the performance (56.45) places it amongst the swiftest available, and even Marek Janowski, a conductor hardly known for sluggish tempi, takes nine minutes longer than Fischer in his recording of this work.

The opening 'Allegro moderato' arguably benefits considerably from the forward momentum that Fischer engenders throughout its 19 minute span, and one's initial surprise gradually gives way to appreciation of the sense of freshness and discovery that he achieves as it unfolds.

In the liner notes Fischer writes of the 'religious ecstasy' and 'majestic proportions' found in Bruckner's music, but when we reach the 'Adagio' it is precisely these particular qualities that, for this listener, seem rather short-changed in Fischer's account of this movement. The composer's indication 'Sehr feierlich und sehr langsam' (Very solemn and very slow) surely suggests something more contemplative and expansive than what is experienced here, and in spite of the magnificently controlled orchestral delivery Fischer's controversially fast tempi will for some listeners seem misguided.

In contrast ,the 'Scherzo' is a joy. It is delivered – to use an equine analogy – at a cantering tempo with a buoyancy and lightness missing from many recorded versions whilst the Trio section is played with great delicacy and charm. Fischer's 'Finale' is both urgent and purposeful with the instrumental lines clearly etched (partly aided by the conductor's antiphonal seating of the violins) and it builds to its blazing conclusion with absolute conviction.

Whatever the differing views that might be held about aspects of Fischer's performance, there will surely be complete unanimity with regard to the magnificent sound quality of Channel's 5.0 DSD recording made in the Palace of Arts Budapest in March 2012. The acoustic of this venue provides warmth and the essential sense of space to allow Bruckner's towering brass-capped climaxes to expand magnificently with no sense of strain. The playing of the Budapest Festival Orchestra throughout is breathtaking, with string playing that is supple and rich but never over-saturated. The burnished sound of the horns and quartet of Wagner tubas in their lament at the end of the slow movement is especially memorable, and timpani are always clean and well defined.

Reservations about the 'Adagio' apart, this is a performance so thoroughly prepared, expertly executed and superbly recorded as to make it unmissable.