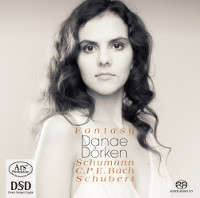 “In Greek myth, Danae, a goddess of music and poetry, was the mother of Perseus by Zeus, who appeared to her in the form of a shower of gold”.

I recently reviewed her latest disk Mozart / Mendelssohn: Piano Concertos - Dörken / Vogt and was much impressed with the refreshing way she played Mendelssohn’s 2nd piano concerto. Reason enough to explore another, earlier recording of her’s.

In her ‘Phantasy’, Danae Dörken proves that she is, indeed, a goddess of music & poetry. And in doing so she is different, too, in that she plays her own interpretations and not copy-pastes of older, established artists whose names are common currency in the wider world. In Germany her talent is already widely recognized and appreciated as a young pianist with a poetic style and personal convictions. Many prizes have come her way and it is high time that she be recognized as one of the next generation of formidable players who are able to add something to our common musical language. The three pieces on this disk give an excellent synopsis of what she is capable of doing, giving each of them her own, often surprising reading.

The programme begins with Schuman’s famous Fantasy Op. 17. What emerges right from the start is that she creates, with a limpid and demure approach, ample room for phantasy. Not the forceful and sometimes demonstrative readings as often displayed by her elder, male colleagues, like, for instance, Mikhail Pletnev (on DGG). She ably transposes the phantasy upon the listener, drawing him or her into her world of make believe. One becomes aware that it is a privilege to listen to her poetic language.

With C.P.E. Bach, one enters with her in an unexpected world. So different that one is not immediately aware that it is Bach. Her romantic coloured reading is nonetheless of an unbelievable honesty. She is not trying to fool anyone. She just seems to be looking at the score from another, very personal angle, giving expression to how it could be interpreted as well. It is intriguing and an eye opener at the same time.

Her top calling card comes in the form of her interpretation of Schubert’s Wanderer Fantasie. Schubert can safely been seen as a major stumbling block for many a pianist. Not because it is difficult in pure technical terms, but rather because of the intrinsic spiritual demands it poses to the interpreter.

A musical phantasy gives the interpreter, as it were, an unspoken ‘right’ to interpret with a reasonable amount of ‘freedom’, and Dörken takes that freedom, as she did in Bach. Her Allegro con Fuoco (first movement) may not be all that fierce, but then again, Schubert tempered it by adding ‘ma non troppo’. Many pianists give it their most ardent expression. Not so Dörken. She remains for a large part poetic, inward looking; as she probably feels apt for building up the phantasy.

Danae Dörken surely doesn’t belong to those shouting their presence on stage as if to say: “look, here I am and this is what I do”. She seems to be in her own world, her own phantasy. The listener becomes a ‘voyeur’, sharing dreams and emotion. The atmosphere she creates is undeniably magical. Schubert is a lifelong challenge and Danae will no doubt further grow into it. I, for one, have greatly enjoyed and admired her daring to express her own views.

And the sound? As usual, with a warm and realistic grand without any disturbing mechanical noises.