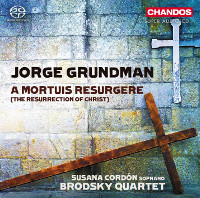 Grundman: A Mortuis Resurgere (The Resurrection of Christ) for soprano and string quartet (2013)


Jorge Grundman uses his unique compositional voice to create music which, above all, communicates with remarkable directness. The simplicity and strength of his artistic vision, intended to reach the widest audience possible, is clear in A Mortuis Resurgere, a work here receiving its premiere recording. Scored for soprano and string quartet, A Mortuis Resurgere sets passages from chapters XIX and XX of St John’s Gospel telling the story of the resurrection of Christ.

Throughout its extended single movement the soprano soloist is required to use a wide range of expressive vocal techniques to communicate the meaning of the Latin text. Supporting the soprano voice is the string quartet, its slowly changing harmonies animated by a surface of rapid rhythmic figurations, all of which combine to produce shifting textures. The contemplative modal-based harmonies are typical of Grundman’s style and form a part of his artistic vision to bridge the gap between pop and classical music.

Joining the Brodsky Quartet is the Spanish soprano Susana Cordón, for whom the challenging vocal part was written. Renowned for its diverse and pioneering collaborations, the Brodsky Quartet has been vital in the development of Grundman’s style, having worked closely with the composer on a number of his earlier works.

I first came across Jorge Grundman's concert compositions when reviewing a disc from his Spanish Non-Profit Music label (God's Sketches - Brodsky Quartet), and was impressed by the honesty and intensity of emotions expressed eloquently in his self-styled 'music from a story' approach. Here he is with another musically unique approach to a story, that being from the Gospel of "John", relating the aftermath of the crucification of Jesus Christ, this time in the Brodsky's home stable of Chandos Records.

Jorge Grundman reminds us that many works over time have been based on the passion and death of Jesus Christ, but few deal with the subsequent resurrection and joy it imparts to believers. He was asked to write a piece to be played during Easter week, to be placed after a performance of Haydn's 'Music on the Seven Last Words of our Saviour from the Cross', commissioned in 1785 or 1786 for the Good Friday service at Cádiz Cathedral in Spain. Haydn adapted it in 1787 for string quartet and in 1796 as a full scale oratorio (with both solo and choral vocal forces). Grundman's 'A Mortis Resurgare' is a not a continuation of Haydn's work but a highly original sequel. His minimalist ensemble includes the Brodsky String Quartet, with whom he had worked intensively on his Non-Profit disc, as he did with the vocalist Susana Cordón, for whom he wrote 'A Mortis Resurgare', which he designates as an oratorio, in the spirit of the earliest forms of that Baroque invention .

Grundman constructed a three-part format, with changes of execution and content in each, so as to hold a listener's attention. As an Introduction which technically follows on from Haydn's last movement (an Earthquake), the Brodskys introduce 'A Mortis Resurgare' by portraying a sober, measured and shocked aftermath of the desolation. The post-Crucifixion world seems helpless and hopeless, but in the final bars a hint of forthcoming love and hope gently emerge.

Part 1 itself deals with Latin narrative from the Gospel of John, selections from Chapter XIX to XX (Tracks 1-10). Pilate surrenders Christ's body to Joseph of Arimathea for interment, then in Chapter XX Mary Magdalene discovers the corpse's absence from its tomb. She meets with Angels who tell her of the Lord's resurrection; then she encounters Jesus himself. This is followed by the doubting of Thomas by his demands to see the Lord's crucifixion wounds. Finally Jesus confronts his disciples collectively and they affirm their belief in his resurrection from the dead (Tracks 4-10). Part 2 is simply the singing of the whole Nicene 'Credo' in Latin, very lyrical and with a wide range of vocal and instrumental textures. Part 3 is a setting of 'Hosanna in excelsis Deo' - the promised jubilation of the disciples having learned of their Lord's return. The quartet express this with gambling rhythms and chugging chords above which are Cordón's rapturous vocalisations and chants. There are some fiery crescendos from her (pleasingly with a Spanish inflection), and a section near the end which reminds me of the soprano aria over an orchestra of cellos from Villa-Lobos' Fifth Bachianas Brasileiras. All this joyful celebration of the resurrection ceases near the end, and as an appropriate touch, the string quartet quietly plays what seems like a remembrance of their introductory part of the oratorio.

In order to prevent the chanting and singing of Latin for a good part of an hour, Grunman interpolates the texts with vocalises (using a single vowel for a vocal florid bel canto). These are used to display emotional reactions to the text or to commune internally about its meaning, and an inspired device in the story's relation.

The composer challenges Susana Cordón with a very wide range of vocal styles; character-acting, chanting, operatic lines of cantabile, vocalisation, coloratura, bocca chiusa, passionate climaxes (with touches of Spanish fire, I was glad to hear) and subtle moments of gentle repose. She and Grundman researched Latin pronunciation with a scholarly nun, and her diction of the language is mainly excellent. Her voice stands up to this score which contains a melée of bravura demands with phenomenal voice control, and she "owns" the piece with her authority and strength. Once or twice, though, when the voice was hard-pressed, there was a touch of sharp-edged tone.

Working excellently with their vocalist, the Brodsky Quartet have a well-known penchant for participation in new and innovative musical projects, so they are in the A Class of collaborators for their rendering of this première recording, having been deeply committed from their first note.

For those listeners who are very nervous when faced with contemporary music in unusual formats, Grundman's early career was in Rock music, where he was an instrumentalist in, and writer for, several very famous bands. Later, he moved into computer music, developing a contemplative modal-based harmonic language and simple, highly expressive melodic strands which he used for films and TV. These traits were subsequently further developed when he moved recently into writing for acoustic instruments with vocals - his "Concert Music". Thus if you are familiar with minimalists such as Terry Riley, Steve Reich, and Philip Glass for rhythms and Rachmaninov/Richard Strauss for rich, expressive melodies, you have nothing to fear from Jorge Grundman's work.

From an early age, Grundman was a polymath. He embraced both Science and Music, and he has several degrees in each of these subjects. For example, his studies of reverberation characteristics in recording venues (too much reverberation blurs detail). He wrote a computer programme to calculate the optimum tempi etc for 'A Mortuis Resurgere' in various churches with their long decay times. This was done because the new piece has a strong religious content, and is thus likely to be performed in ecclesiastical venues. He is also a very experienced recording engineer, and made the SA-CD masters for this disc.

With Chandos' Ralph Cousens as the Executive producer and other technicians from Spain, the recording appears to have been made in a studio or small hall at IES San Fernando, Madrid. The balance is a close one, very much "musicians-in-the-room", but the neutral ambience is not at all obvious; even in its 5.1 multichannel mode the listening volume has to be quite high to hear the venue's very short decay. I personally would have preferred a more open space to allow Susana Cordón's powerful upper registers to sing out more dramatically, rather than being somewhat overbearing. However, the microphone settings certainly don't miss any detail.

Chandos' presentation is as good as usual, with an informative track list in the booklet, equipped with metronome speeds and the locality of each Vocalise within the narrative of Parts 1 and 3. Plenty of useful discussion about the music is given both by Mervyn Cooke and the composer himself, in English, German and French. The Latin Text from the Gospel has an English translation.

To a non-believer, this human drama is beautifully portrayed and lavished with rich expressiveness by the relatively small, and thus intimate, musical forces, ending with energetic jubilation as it does. To a believer, this fine performance might well fulfil Grundman's hope that listening could induce a religious experience in them. At any rate, it can hardly fail to give an interesting and memorable musical experience to any listener.

I can only echo Geohominid's praise.

Here, Chandos is the vehicle for the Non-Profit Music recording (a charity established to support Medicines Sans Frontieres) and no party disappoints Grundman's music. Written as a companion piece to Haydn's 12 Last Words, this reflects upon Grundman's emotional response to the subsequent resurrection. As is clear from the emotional character, his opening of the work is situated immediately following the crucifixion and the calmer mood painted by the Brodsky Quartet is in stark contrast to the pained expression of Susana Cordón. Indeed, this is no purely celebratory work in which past suffering is forgotten (never mind forgiven). Rather, the message of optimism that many Christians relate is largely absent and only breaks cover tentatively towards the end.

The instrumental writing is interesting because, although it is a rock upon which the soprano anchors her pained expressivity, during purely instrumental passages there is a barely suppressed forcefulness that owes a great deal to minimalism; I found these passages very effective. Equally, the sense of repose in the central Vocalise (amongst others) is touching. All performers enunciate their lines with admirable clarity which lets the contrasting textures to become clear. Although Cordón's tone hardens from time to time, this is an audible response to emotion she finds in Grundman's writing.

There will doubtless be some listeners for whom this style of writing is not sufficiently "authentic" to either previous treatments of the resurrection in music or to high art music. There are some media organisations which will not give this piece a (fair) hearing but I can see this appealing to many listeners of, say, Classic FM for the reasons set out with admirable clarity and comprehensiveness by Geohominid.

The only cavil I have is that the recording is, perhaps understandably given Grundman's musical history, like a "pop" album for my tastes. By that, I mean there appears to be too little of the acoustic signature of the room being revealed in MCH. The dynamic range is not narrow, the timbres are conveyed well and there is no hint of compression nor sending performers around and about the sound stage.

[Full disclosure: Jorge Grundman supplied me with a review copy of this disc.]