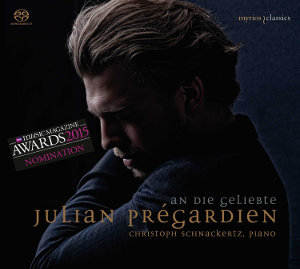 
Unrequited love was the wellspring of countless songs and poems in the Romantic era: young tenor Julian Prégardien presents his first solo lied album with a diverse program me of 19th century art songs. Certain moments are full of heartbreak, others more tongue-in-cheek: Julian Prégardien invites us to join him on his exploration of the Romantic era in a quest for the (distant) beloved, from the first song cycles by Beethoven and Weber to the height of the genre in the lieder of Wolf and Strauss.

Lyric tenor Julian Prégardien (b.1984) presents his first recording of solo Lieder. He introduces an inspired programme that takes us through the gamut of emotions to be found in early and late Romanticism's concept of the "Distant Beloved", and its part in song-cycles.

Julian reminds us that to understand the power of the German Lied we must realise that more is going on in its poetry than is being said. The poetic ideas themselves are full of symbols (frequently of various forms of Love). These are transformed and sublimated through the Lied composer's and singer's musical and dramatic re-enactments. For Julian Prégardien it is the opportunity to act, by taking up roles suggested by the poets, which attracts him artistically. And acting is certainly what he does; I can't remember hearing quite such vivid portrayals of love-lorn characters in Lieder before. In the booklet, he shows the lighter side of his art by noting that none of the deserted males ever do anything about their plights!

Beethoven was one of the earliest Lieder composers, with 80 or so songs composed before Schubert's. It was Beethoven who coined the word "liederkreis" (song-cycle) in a letter of 1816 to his publisher. He had a passion for poetry, unlike his predecessors, and his meticulous taste was an important factor in composing the first song-cycle, "An die Ferne geliebte" (To the Distant Beloved), Op. 98. In fact he is known to have worked with poet Alois Isidor Jeitteles in preparing the text for the cycle in 1815. The cycle consists of linked simple strophic songs, forming a continuously unfolding network of tonal and thematic relationships. Beethoven teased out immediate musical details to encompass the 'immeasurable' in a poignant new format.

Julian Prégardien begins the cycle with the poet's words "On the hill I sit gazing" in a half-tone of deep inwardness, gently supported by pianist Christophe Schnakertz, who is in the same mindset. Together they sense that a lightness of touch and emotional fragility is required, rather than the usual sentimentality of such songs of vernal yearning . The verses are sung, as the last song declares, "...with no display of art, Aware only of longing", and there is never a hint of the overbearing found in some interpreatiions. Indeed, this is a case where the adage "Art that conceals art" describes this revelatory performance, and the production decision not to use separate tracks is quite justified because of the cycle's cohesion.

The next song cycle is from Carl Maria von Weber, a young early Romantic contemporary of Beethoven's, who died a year before Beethoven in 1826. Renowned mostly for his operas, two symphonies and some piano music, he wrote about 100 songs, most with piano accompaniment, some with guitar. Unaccountably, these songs are rarely heard in concert or recording (currently there seem to be less than a handful of discs of his Lieder). From this repertoire, Prégardien has chosen a short cycle from 1816, the same year as Beethoven's 'An die ferne Geliebte'.

'The Four Temperaments Upon the Loss of the Beloved, Op. 46' has a very different structure than Beethoven's cycle; there is a symbolic lyrical theme which leads to four lengthy variations based on the ancient Greco-Roman theories about medicine. Disbelieving of such baseless philosophy, poet and musician seem to concur in writing an often comic and always sardonic cycle.

Weber's poet was his acquaintance Friedrich Wilhelm Gubiz, who compiled an amusing series of cliché-ridden, ironical verses which are more like a play than a song, thus offering Prégardien a fine opportunity to display his vocal acting skills - and Schnakertz is given an equally comic piano score. "The Light-hearted Love" is almost breathless in its Vivace giojoso, while the playful piano tries to imitate the singer's false operatic runs and ornaments. "The Melancholy Looser" has a bewitchingly beautiful melody, sung half-toned. Later the text runs into the clichéd line "the sounds of Love made me soar" to which Prégardien responds ironically by opening his throat as an Heroic tenor and singing out loudly into the venue's ambience. Martyn Hill's RBCD version with Hogwood is sincere, but notably plainer than Prégardien and Schnakerz.

For the second half of the programme the duo move on to examples of the Lied in the Late Romantic period, when the nineteenth century medium of Art Song had attained much higher rank. Richard Strauss and Hugo Wolf are contrasted in Prégardien's choice of their repertoires.

Strauss' 'Mädchenblumen' (Girl Flowers) of 1888 was a friendly gesture to Hans Buff-Giessen, a tenor member of the Weimar Court Opera, where the composer was conductor. Using poetry from the contemporary Felix Ludwig Julius Dahn, Strauss picked up on Dahn's verses being a product of the Art Nouveau movement, where poet and composer with a nod and a wink payed homage to the image of the "femme fragile".

This cycle is nowadays mostly sung by sopranos, as the tenor part goes unusually high, but Prégardien has no problems, using a sweet and deeply romantic voice, married to a twinkle in the eye. Strauss' very orchestral and lavish piano part adds excitement from Liszt and splendour from Wagner.

Hugo Wolf, in his short life vainly trying to acquire Strauss' huge success, was a specialist of the Lied. Prégardien has chosen six of the 53 settings of Mörike, the last referring back to Beethoven's distant beloved. Wolf discovered previously unrealised sentiments in Mörike's poetry as noted in the booklet; emotional extremes, derisive humour and mythical worlds of enchantment. Prégardien's flexible and intelligence-driven vocals certainly shine new light on these aspects, giving food for thought..

Completing the circle in his group of songs, Prégardien returns at last to Beethoven, a song entitled 'Resignation' WoO 149 (1814-1817). It moves from the heavy-hearted cantabile of Wolf's 'An die Geliebte' to a state of near despair. Engrossed in preparing this programme, Prégardien reports in his booklet's Foreword that it seemed to become his own "Liederkreis".

Thankfully, this refreshing recital has been given a first class recording in the responsive acoustic of Deutschlandsfunk Kammermusiksaal in Cologne, and if you listen closely, you will hear the singer's craft using the acoustic to enhance his interpretations. The piano sounds very realistic and is an ideal distance from the singer, giving no chance for drowning the voice. I was especially delighted to hear very soft singing and playing which lost nothing in tonal quality and expressiveness.

A beautifully-composed booklet on glossy paper contains, as well as the singer's Foreward, a very well considered essay about the music on the disc in three languages. But alas, there are no translations of the texts, and although newcomers to Lieder might be satisfied with written summaries of the songs in the essay, die-hard Lieder lovers will need to read the text and translation in parallel to gain the most from their listening experience. However, if you are prepared to do a little work, most English translations can be found on the Internet or in Stokes (reference below)

In his first solo recital, Julian Prégardien has shown a devotion to research and interpretation of his material, as well cultivating his vocal crafts and interpretations. His father, Christoph, has the same visionary qualities, and this première suggests that Julian could have a success at least as great. Indeed, having shown sympathetic regard for Weber's Lieder on this disc, he might consider producing a whole SA-CD of them! Highly recommended.