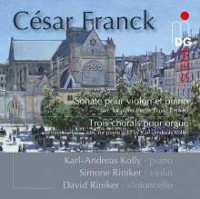 
Diamond Solitaire
César Franck’s Violin Sonata is a diamond solitaire of the violin literature. Incomparable lyrical wealth forms a bold contrast when it meets the wildest intensity. Here formulaic violin composition and empty virtuosity are nowhere to be found; the challenging violin part and the incredibly high velocity of the piano part mean that the musicians have to give their all. This work is also popular with cellists, and the outstanding qualities of both stringed instruments form a perfect union in David Riniker’s brand-new version for piano trio. No wonder, since his experience as an arranger for the Twelve Cellists of the Berlin Philharmonic and as a member of this ensemble produce a compelling listening experience in which the cyclical structure of the sonata develops to its best.

Wedding Gift
Is a programmatic idea involved? The suspicion that this may be so has been aroused by the following circumstances. While composing the sonata Franck drew on sketches that he had intended to use in his mid-thirties for the wedding of Cosima Liszt and Hans von Bülow. Cosima’s father Franz had elevated the combination of program music and symphonic music and of sonata cycle and sonata movement to previously unattainable heights. The work never became a wedding gift for Cosima. Later, when Franck was already in his sixties, he elaborated the sonata, dedicating it to his friend Eugène Isaye – on the occasion of his wedding!

Living Legacy
Shortly prior to his death Franck kept a resolution that he had made many years before. His Trois Chorales creates the impression of a legacy in which he repeatedly refers to his great model Bach. Just listen to the toccata-like beginning of the third chorale! But France’s magnificent organ romanticism, above all reflected in Widor’s works, is also reflected in this music. Very much in keeping with Franck, who arranged numerous organ works for piano, Karl-Andreas Kolly performs his own piano version.

Pleasure Principle
The phenomenal bass register of the “Manfred Bürki” Steinway concert grand piano of 1901 offers a profound foundation, and Kolly’s skillful hands even produce what is actually impossible – 32’ sounds! This high-resolution SACD recording guaranteeing genuine three-dimensional listening pleasure in the home with MDG’S 2+2+2 sound is the perfect complement to this suggestion. All things considered: fine balance!