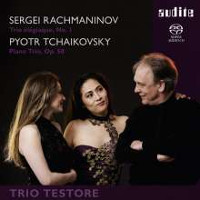 
​After the successful release of the Brahms Piano Trios, audite is now presenting a second SACD with the Trio Testore. It sheds light on a special side of Russian chamber music: Tchaikovsky's and Rachmaninov's works for piano trio are conceived as dedications and memorials.

Pjotr Tchaikovsky composed his only Piano Trio in memory of Nikolai Rubinstein, his mentor and friend. He paid tribute to Rubinstein's pianistic brilliance with the work's demanding piano part, but integrated it also into the communicative context with two equal partners: symbolically, the virtuoso receives resonance, support and stimulation from them. Sergei Rachmaninov took this two-movement work and its fundamentally elegiac character as a model when he composed his First Piano Trio at the age of seventeen. In it, he was already able to mould essential elements of his style, his type of melodic invention and the development of further correlations.

The history of the dedications of the works determines their individual form and their personal, passionate tone. They are thus exemplary for a tradition that continued to make its effect far into the 20th century. 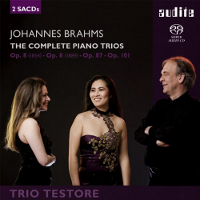