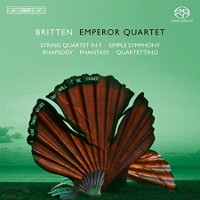 
On two previous, highly acclaimed discs the British Emperor Quartet have released Benjamin Britten's three numbered string quartets. Their performances of these undisputed masterpieces of 20th-century chamber music have been variously described as 'stupendous' (Classic FM Magazine), 'a wonderful homage' (Ensemble), and 'a complete cosmos of colours and nuances' (Fono Forum), and the two discs have received top marks and distinctions in magazines such as Fanfare, Diapason and International Record Review.

For the final disc the quartet have gathered five works from the composer's earliest period, from the String Quartet in F, by a fourteen-year old schoolboy, to Simple Symphony, composed six years later and the work which may be regarded as his breakthrough. As discussed in the insightful liner notes by the musicologist Arnold Whittall, these compositions demonstrate how the young Britten developed a personal style of his own.

The influence of his teacher Frank Bridge was important, but so was his own growing interest – fanned by radio broadcasts – in the music of impressionist and neo-classical composers, as well as Bartók and Schoenberg. In 1930 such influences prompted what remains one of Britten’s most intensively progressive works, the Quartettino.

Aged sixteen, Britten himself was probably uncertain of the reactions the work might receive: it seems that he never showed it to any of his composition teachers, and the 16-minute piece in three movements remained unperformed and unpublished until after his death.

In his Phantasy for string quintet and in Simple Symphony, composed for either string orchestra or quartet, Britten retreated somewhat from the terse language of the Quartettino, and after Simple Symphony, he only returned to the quartet medium in order to compose the three numbered quartets, in 1941, 1945 and 1975.

Except for the Simply Symphony (in string quartet guise) all of this music is unfamiliar to me as I imagine it will be for most people. All of these pieces were written between the ages of 15 and 21 and give a glimpse into Britten’s development as a composer. Starting with the most familiar, the Simple Symphony was written to be played by either string quartet (as here) or string orchestra (which is how I know this piece). It is full of good melodies which provide the focus of this work when played by just four string players. The second movement (playful pizzicato) makes excellent use of that technique and is especially fun to listen to being so well-articulated by the Emperor Quartet. In a string orchestra setting, tutti pizzicati have a tendency to blur but that is not an issue here. The playing is precise and quite exciting. The following movement (sentimental saraband) is rueful and melancholy in tone and it is expertly conveyed by these players. All in all, this was a refreshing re-hearing of a fairly familiar work.

The earliest piece here is the String Quartet in F (1928), a four movement, 22 minute work. This sounds a bit like the 15-year-old composer channeling Haydn though the tonality is more advanced than anything Haydn would have written. This is skillful writing for the string quartet medium. The booklet note writer, Arnold Whittall, cites a “Dvorak-like ebullience” with which I agree. The brief second movement (andante) presents an eerie, pulsing two-note chord (from the second violin if I’m not mistaken) while the other strings take turns interjecting somber melodic lines. And then, like gossamer, it fades away. This is quite an outstanding 3 minutes of string quartet writing. While the rest of the quartet doesn’t rise to that level of inspiration, I am glad to have heard it and will return to it if only to experience that wonderful second movement.

A year later, Britten composed the Rhapsody for string quartet, a single movement piece in three sections that lasts 7 minutes. Under the tutelage of Frank Bridge, Britten is moving towards a more modern sound. This work seems to have a good bit of influence from the French school with its perfumed, chromatic harmonies. One could easily imagine this being a lost work of Debussy or Ravel.

The Quartettino (1930) is a concentrated three movement work lasting 16 minutes. Here the writing acquires more dissonance, sounding a bit like Bartok in a melodic mood (how’s that for stretching a metaphor?). What a difference two years makes! Clearly, Britten is expanding his tonal palette and the result is quite wonderful to hear. The second movement (poco adagio ma con moto) follows the first without pause and features muted strings which create a veil of sound that seems to want to burst its seams and then does at the midway point. It is interesting to note (from the booklet) that Britten never showed this work to Bridge, likely because he would have not understood it. It remained unpublished until after his death.

The Phantasy in F minor for string quintet (1932) was the first and only time Britten composed for the string quintet. The ensemble employs a second viola and the work is a single, 11-minute movement with four distinct sections. The adventurousness displayed in the Quartettino is muted here though the work is fairly chromatic in its demeanor. Don’t expect the throbbing melodiousness of a Brahms quintet! Still, there is much that is attractive in this piece.

The Emperor Quartet have been around since 1992 and their long years of playing together show splendidly in their performances on this (Volume 3) and the prior volumes of this series. Wonderful music making all around assisted by violist John Metcalfe in the quintet. The recording (24-bit, 44.1 kHz) was done by sound engineer Jeffrey Ginn at Potton Hall in Suffolk. The sound (in stereo SACD) is splendidly clear and natural with just enough ambience to create the illusion of being in the hall with the performers. Bravo to all involved!

One of the rare cases where I find myself disappointed with a BIS recording. There is nothing broken, but the works in this series come across as tonally flat and lacking in dynamics. I'm not an advanced consumer of string quartets but I have recordings of Shostakovich, Bartok and Beethoven that are quite sonically superior to the Britten series. A shame - when one consideres the combination of BIS, Britten and Emperor Quartet.

I do not have this disc but noting your disappointment reminds me that several recent BIS recordings in our collection have had rather muddled resolving capability and screechy high strings. They used to be much better not necessarily in hi fi terms but in the overall presentation of the concert hall acoustics with realistic sound levels. 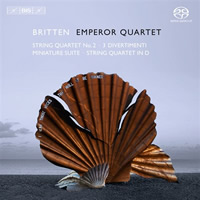 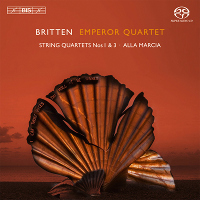